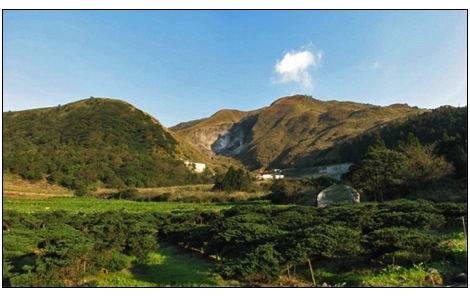 Yangmingshan is Chinese for something like “Bright Sun Mountain”, and it’s deserving of the name; catching a sunset here is breathtaking.
There are a ton of hiking trails throughout the National Park’s area; if you are looking to hike be sure to check out the high-resolution area map that is provided on the official website. The Visitor Center will also give you maps and info on other hikes.

Yangmingshan is not a massive mountain by any means, so inexperienced hikers shouldn’t have a big problem with any of the common trails. The Yangjin Highway Pedestrian Trail is easy and as it follows along the highway, you probably won’t get lost. It’s about 13.5km though, so it will take a few hours to get through.

The mileage you get out of Yangmingshan National Park in Taipei may vary based on the time of year or time of day you go. One of the biggest attractions is to see the flourishing cherry blossomsthat come out each spring, which usually starts around late February or early March.

You can also get a chance to see or climb Mt. Qixing, the highest peak in Taipei City. Another peak, Mt. Datun, contains a marshy pond with walkable paths for those interested in swampy vegetation and animal life.

To relax from the tiresome hike, you can plop down for a while in Qingtiangang, a grassland area that is encircled by the mountains of the Yangmingshan area. Lots of people picnic and relax here, and it’s a good alternative to hiking if you’re with kids or older folks.

Finally, on the subject of relaxation, Yangmingshan National Park in Taipei offers quite a few hot springs, as parts of the area are volcanic.

Getting to Yangmingshan from Taipei City

Take the MRT to Jiantan Station, then hop on Bus Red 5, which will take you to Yangmingshan National Park.

Another convenient way to get to Yangmingshan National Park is to take Bus 260 on Zhengzhou RD, behind Taipei Main Station. This bus leaves every 15 minutes for the park.

Hiking in Taiwan
When people think about Taiwan, they mostly think about big cities and factories. Very few people actuelly know that Formosa is one of the best places in the world to climb and hike.
Check out more places to hike in Taiwan!