The Westin Hotel is located right next to Songshan Airport in Taipei.
It is in fact the best Taipei airport hotel in Taiwan’s capital! 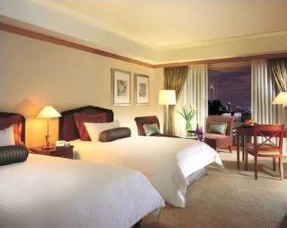 Info About the Westin Hotel in Taipei, Taiwan

I’m hungry: The Westin Hotel in Taipei doesn’t have a restaurant per se, but you won’t starve there. Their theater and executive lounge has some snacks and tidbits available, but you’ll probably want to leave the premises for a proper meal.

More About the Westin Hotel Taipei

The Hotel Westin Taipei in Taiwan may be an appropriate choice for the business traveler – its location puts it within striking distance of most of the big technology companies in both Taipei’s Songshan and Neihu districts. It’s also really close to the MRT, which is hard to come by as a lot of the big-name hotels in Taipei were built before the relatively new public transit rail lines. It also provides a lot of useful services for those on business, such as translation services, dry cleaning, currency exchange, printing, mobile phone rental and more.

It’s not only for those trying to meet up with Taiwanese technology companies, though. The Taipei Westin Hotel boasts its own movie theater, an indoor pool, even an upscale flower shop.

If you’re looking into sightseeing, the Westin Taipei may not be the best choice accommodation as it’s not very conveniently located for that purpose. It’s quite far from any of the must-see Taipei attractions, except possibly Sun Yat-Sen Memorial Hall, but even then you’ll have to ride the MRT for a bit.

The Westin Hotel Taipei is, however, close to the Tavern, one of the institutions of Taipei pub life. The Tavern is a great spot for decent drinks at a decent price, watching whatever sports event you’d rather not miss, and of course there’s Wednesday night salsa dancing.

Check room availability and make a reservation at the Westin Hotel Taipei now!

Visit HotelsCombined.com now to check current room rates and book your stay at the Hotel Westin in Taipei. Hotels Combined has a very reliable hotel booking system and I’ve used their website for years. From there, you’ll also be able to find tons of other quality hotels in Taipei and Taiwan.

Taipei Westin Hotel on a Map

Return From Westin Hotel Taipei to All Taipei Hotels