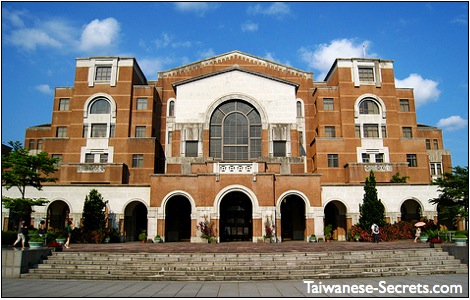 Information About the 5 Best Taiwanese Universities

Taiwan’s universities are numerous and the people of Taiwan are highly educated. Which university you get accepted to is totally dependent on your performance on the national exams. Any of the five universities listed here, the best in town, are extremely competitive and desired by the vast majority of students in Taiwan. Having your name associated with one of these universities is a highly coveted honor.

Thinking about doing an MBA in Taiwan? Read this!

National Taiwan University (referred to by the Taiwanese as Tai-Da, a shortening of the Chinese “Taiwan Daxue”), or NTU, is and has been atop the list of all of Taiwan’s universities. Tai-Da brought special pride to Taiwan in 2009 when it became the first Formosan institution to crack several lists of the world’s top 100 university (it currently sits at #94).

The campus of NTU takes up a massive area in central Taipei, and is the ultimate goal of most of Taiwan’s aspiring youth. The university also serves as a Mandarin Training Center and has a large and increasing number of foreign students both at the undergraduate and research levels.

Tsinghua (Qing-Da), like Taiwan itself, competes with its Beijing counterpart for who claims hold to the original Tsinghua title; the mainland version is also widely regarded as the #2 university in its region. Tsinghua in Hsinchu, Taiwan is a master producer of gurus in the STEM fields (Science, Technology, Engineering and Mathematics).

It has given Taiwan its only Nobel Laureate, Yuan Tseh Lee, who studied chemistry there and won the award of all awards for that same field in 1986. Qing-Da has since expanded into other fields, but its reputation and emphasis remains STEM through and through.

Amusingly named (it translates to “Success University”), Cheng Kung University in Tainan is also heavy on the sciences, but also has a good reputation as a medical school. The university, like NTU, was in fact founded by the Japanese imperialists who ruled the humble island of Taiwan in the early 20th century.

Its name might be appropriate after all – Cheng Kung is often cited by businesspeople in Taiwan as the most desirable name for young applicants to have on their diplomas. Tai-Da has a reputation for churning out lefty academics and Tsinghua focuses heavily pure scientific research. “Success”, as businesspeople know, lies in the day-to-day.

Chengchi (Cheng-Da for short) is tucked away in the mountains of Muzha, near the Taipei Zoo. Westerners often look at its curriculum and teaching style as being the closest among Taiwan’s schools to western institutions. While many of Tai-Da’s professors have studied abroad, the students are memorization mutants that through sheer determination aced the entrance exams.

Cheng-Da (translation: Politics University) is a bit more open-minded and specializes in social sciences, politics, economics, media and liberal arts. Many foreigners doing Master’s degrees or PhDs choose to do them here.

Chiao Tung got its start in Shanghai, but the people in charge brought it to Taiwan in the 50s. This technically makes it the oldest university in Taiwan, but universities always say stuff like that.

It’s in Hsinchu and is a major center for the study of business, entrepreneurship, computer science and management. It serves as the jumping-off point for many of Taiwan’s electronics companies and innovations, and is sometimes referred to as an Asian counterpart to Silicon Valley.