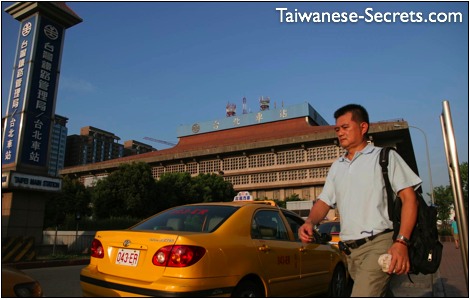 Find all the information you need about transport in Taipei City before you get there, so you know how much to budget and what to pack.

The three easiest ways to get around Taipei City in Taiwan are:

This article is for travelers / visitors and that’s why I won’t get into the details of renting or riding a motorbike in Taipei, which is usually too much trouble when you’re on a short stay in the capital. Check out this page if you’d like to get more information about riding a scooter in Taiwan.

There’s no doubt that the best public transportation in Taipei is the MRT. You’ll fall in love with the Taipei Metro as soon as you walk into a station.

Most attractions in Taiwan’s capital city are near an MRT station. The subway is cheap, modern, and absolutely safe to use at all time of the day.

The main (most central) MRT station is conveniently located in the same building as Taipei Train Station, Taipei HSR Station, and the city’s main bus terminal. It’s called Taipei Main Station and you will find yourself there at one point or another during your trip.

Taipei MRT Fares
A single trip on the MRT will cost you somewhere between 15 and 65NT$ depending on the distance. If you plan on doing a lot of travel, you should get the EasyCard. This card costs 500NT$ and gives you 20% discount.

You can find more info about MRT transport in Taipei here.

Walking is, well, free, and there are wide sidewalks that can take you around the city to most popular touristic spots. Exploring Taipei by foot is the best way to discover new places and things you might not find if you stick to your guidebook or always ride taxis.

One thing to consider if you plan on walking a lot is to carry a day-pack with a bottle of water, an umbrella (or rain gear), and a detailed map of Taipei. You can get free Taipei City maps at Taoyuan International Airport.

Be extremely careful when you cross streets in Taipei – Taiwanese drive like maniacs and they won’t slow down for you. Pedestrians are at the bottom of the “right of way” chain.

Taking a taxi is relatively cheap in Taipei and it’s my favorite option to travel around in the sizzling summer months, when it rains, or when it’s too late to take the MRT.

Taipei is a very safe city and I have never felt threatened walking outside late at night. Then again, women might feel less at risk moving around unknown streets and alleys in a taxi.

Other things to consider about taxis in Taipei:

If you’re only gonna be in Taipei for a few days, don’t bother trying to understand how to use the public bus system as it can be quite confusing if you don’t know your way around the city and the name of the main buildings or landmarks.

One of the easiest ways to find which bus to take in Taipei City is to ask someone who works at an MRT station. Most subway stations have tourist information counters with English speaking staff.

Once on the bus, try to stay at the front, near the driver and ask him/her to tell you when you reach your destination. Even if he doesn’t speak English, he will most likely understand the name of the destination.

Renting a car in Taipei City

Again, for obvious reasons (crazy traffic, Chinese signs, affordable taxis), renting your own car is not the best form of transport in Taipei. This advice is mainly for short-term visitors.

If you’re going to be spending a considerable amount of time in the city, either for work or study, having your own wheels does have its many advantages.

Make sure you bring your international driver’s license with you if you want to hire a car in Taipei and drive it yourself.

If you’d like to rent a car in Taiwan’s capital city, you can contact or go to:

Free Taipei Maps – Get Yours!

The free maps you can get at the airport give lots of invaluable details about Taipei transportation. Most tourist maps will show attractions such as museums and temples, and you can clearly see which MRT station is closest to your destination.

Do take your free Taipei maps at the international airport! They are hard to find elsewhere.

If you’d like to get more information about transport in Taipei City in Taiwan, you can head to this page about travel in Taipei.

I hope you liked this page about transport in Taipei, Taiwan!

Return from Transport in Taipei to Taipei City Guide