Tomb Sweeping Festival? Sounds a bit strange at first. Actually, once you know what it’s all about the festival is pretty cool. I’ve personally had the chance to join my wife’s family twice for a tomb sweeping day in the mountains near Jhushan, in Nantou County, in Central Taiwan.

What is Qingming Jie?

Tomb Sweeping Festival is one of the most important of the Chinese traditional holidays, especially when it comes to ancestral worship. Anyone remotely familiar with traditions in Chinese culture knows that elders and ancestors are of ultimate importance, and Qingming Jie puts them in central focus.

When is the Tomb Sweeping Day?

The festival takes place on April 5 of the western calendar. It is a national holiday in Taiwan and nearly everybody gets the day off for it. It is one of the oldest holidays on the planet that is still practiced today.

The legends that lead to the Tomb Sweeping Festival ‘s origins date as far back as 2,500 years. Maybe that’s because the rules are simple and meaningful, but who knows.

Qingming Jie’s origins actually seem to oppose the ancestral tradition in a way. Supposedly, Tang Dynasty emperor Xuanzong couldn’t stand the fact that his constituents were constantly paying respect to their ancestors rather than doing things of the more productive variety. Therefore, he limited them to only one day of worship, namely, Tomb Sweeping Day.

Banned in China, encouraged in Taiwan!

Among the more politically-minded, the Tomb Sweeping Holiday is a source of pride for Taiwan. In its effort to deplete China of its cultural history, the Communist Party of China banned the Chinese Tomb Sweeping Festival for nearly four decades, starting from the party’s takeover of the country in 1949. Its practice was finally reinstated in 2008. Taiwanese proudly state that they have maintained their traditions in spite of modernization and dictatorship.

The relationship between tombs and ancestors is clear enough, but what about the sweeping? For Tomb Sweeping Day, a family must visit the graves of their ancestors and make sure they are in proper order. Chinese graves are often large and elaborate and therefore require a good bit of maintenance.

On Qingming Jie, Taiwanese head to a graveyard, make sure their previous generations’ tombs are swept clear of any funguses, insects or otherwise unpleasant things. Weeds are uprooted, underbrush is brushed aside. Also, they offer uptraditional Chinese foods, liquor or “ghost money” or anything else that they think their ancestors might desire or need in the afterlife.

Tomb Sweeping Festival brings out a peculiar type of entrepreneur, who makes a buck by selling joss paper accessories for fairly extreme prices for those looking to make their ancestors’ comfortable. 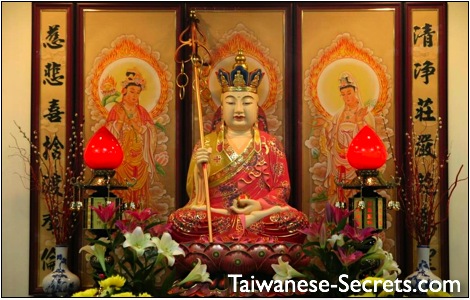 They could include joss paper versions of cars, air conditioners, even to the point that you can buy your 60-years-gone great grandfather an afterlife-appropriate iPhone. These items get printed on joss paper and burned (just as is done with ghost money), thus sending them on to the next world.

Many families in Taiwan turn Qingming into something of a mini-vacation. Most of the graveyards lie outside of city centers near mountainous areas, making for a nice long weekend where they can go for a picnic, a hike in the hills, or

For travelers, there’s not a lot to take advantage here (such as the beauty of the Lantern Festival), but it’s never wrong to take part in something 2 millennia old.