A photo gallery about the culture of Taiwan! 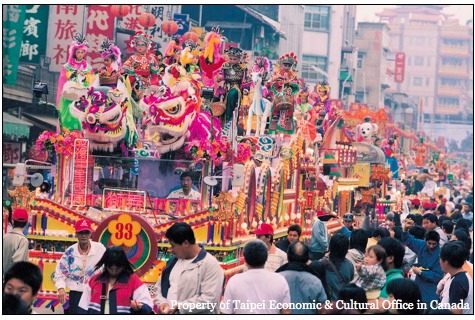 Temple performers take part in a religious procession during the Mazu pilgrimage in Beigang, in southern Taiwan. 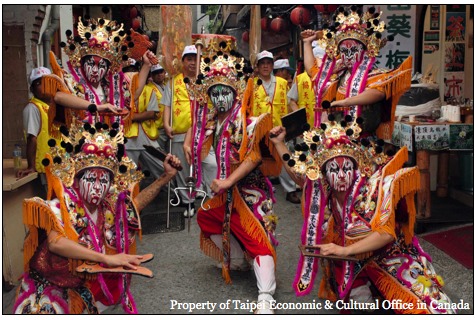 Five Daoist “guardian generals” strike menacing poses during the “parade of the generals” at a celebration which pays homage to Matsu, Chinese Goddess of the sea. Taiwanese people are devout believers of Matsu and celebrations for the deity are held year-round in Taiwan. 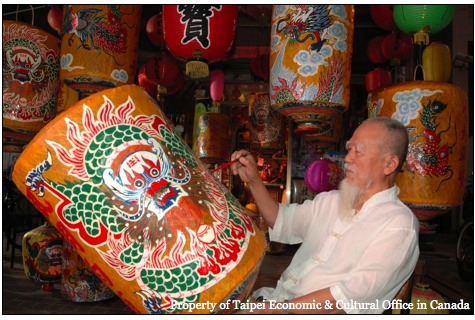 National folk arts master Wu Dun-hou of Lugang Township (Central Taiwan) has been making traditional handcrafted Chinese lanterns for 70 years and continues to do so in his shop to this day. The paper lantern is a popular symbol of Chinese and Taiwanese cultures. 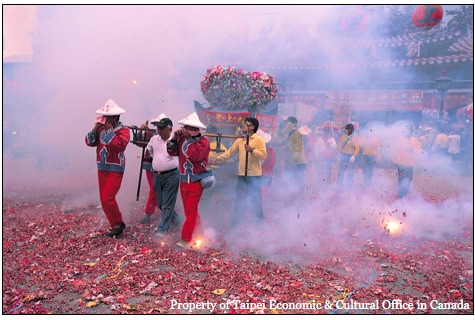 Mazu, Goddess of the Sea, is bombarded with firecrackers during the Mazu pilgrimage in Beigang, southern Taiwan. Firecrackers have a very important place in Chinese and Taiwanese cultures. Thay are said to keep evil Chinese ghosts away. 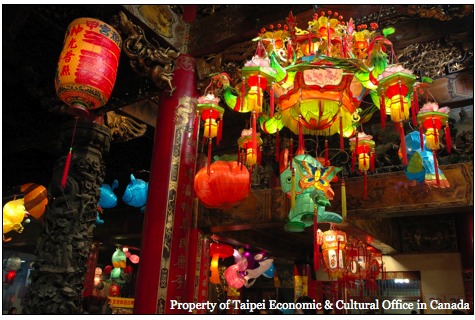 Each year, colorful Chinese paper lanterns are hung in temples and homes during the Lantern Festival, right at the closing of the Chinese New Year Holiday. In Chinese culture, lanterns symbolise hope for a bright future. 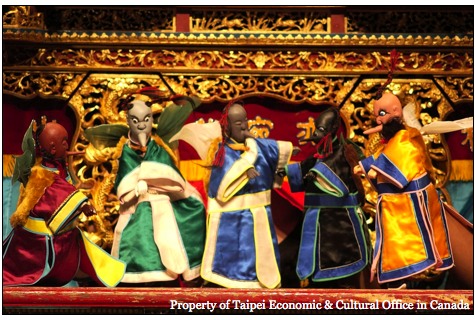 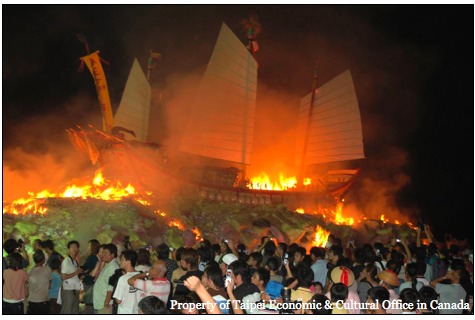 The burning of Wang Ye’s boat is one of Taiwan’s most important temple festivals. The event is held every three years, in October, in the old port town of Donggang, in southern Taiwan. 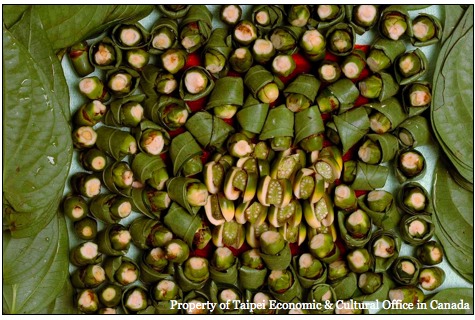 Taiwanese people like to call the betel nut Taiwan’s chewing gum! Betel nuts are chewed for their effects as a mild stimulant. The nut is Taiwan’s second largest agricultural crop. 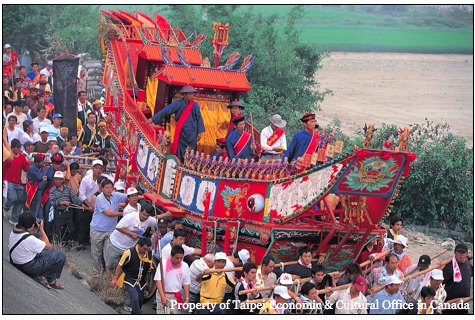 An event is held Anping Township in Tainan County (southern Taiwan) to commemorate the founding of Changhsing Temple. The celebrations include the carrying of Wang Ye’s boat around the local area. 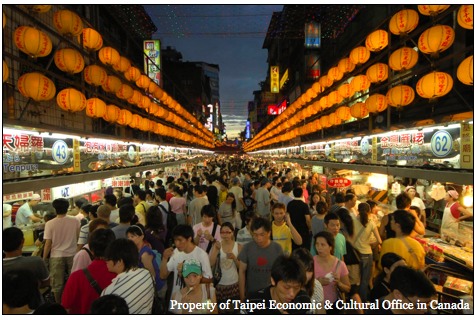 One of the most popular things to do when traveling to Taiwan is visiting a night market. Night markets are an integral part of Taiwanese culture – they can be found in most cities and towns around the island. 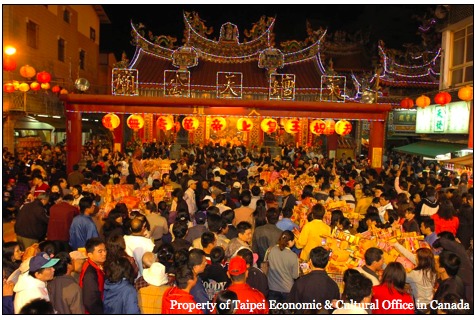 Large numbers throng to Tiantan Tiangong Temple in Tainan on the 9th day of the first lunar month, the birthday of the Jade Emperor, Taoist ruler of heaven, to pray for peace and safety for family members in the coming year. 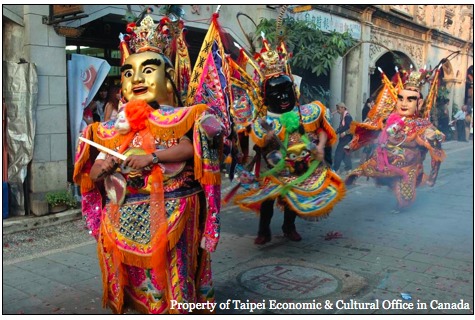 The lively and spirited Three Princes of folk legend dance in a parade celebrating the birthday of Guan Gong in Dasi Township. 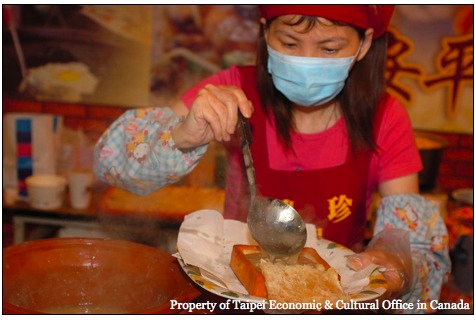 A Taiwanese woman prepares a fried coffin sandwich – a famous Tainan snack. Food has a vital place in the culture of Taiwan. Each city and town has its own special snack. 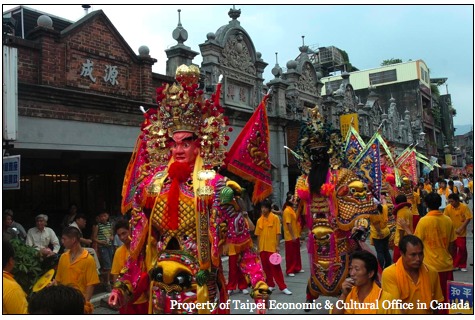 People wearing over-sized “guardian general” costumes parade down Dasi Old Street in Dasi Township as part of a folk ceremony commemorating the birthday of the legendary Chinese general Guan Yu. Japanese-period buildings with baroque facades can be seen in the background. 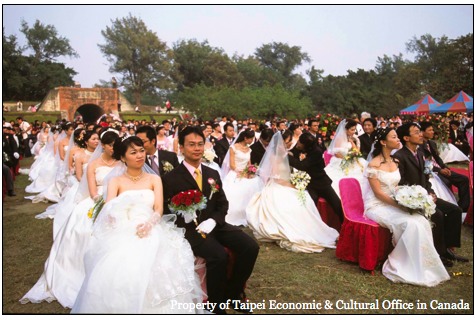 A Taiwanese group wedding is held at Eternal Golden Castle in Tainan City. Mass weddings like this one are extremely popular in Taiwanese culture. 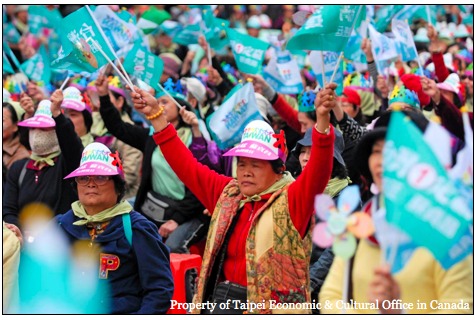 Throngs of voters turn out to pump up support for the DPP ticket of Frank Hsieh and Su Tseng-chang at a political rally durin the 2008 presidential election campain. Hsieh and the DPP eventually lost the election to Ma Ying-jeou from the KMT (Kuomintang) party. 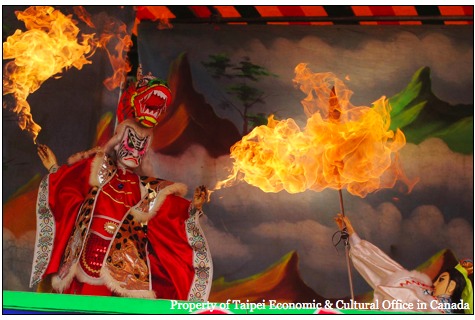 Glove puppetry is also known as budaixi in Mandarin. This type of traditional Chinese opera originated in southern China in the 17th century. 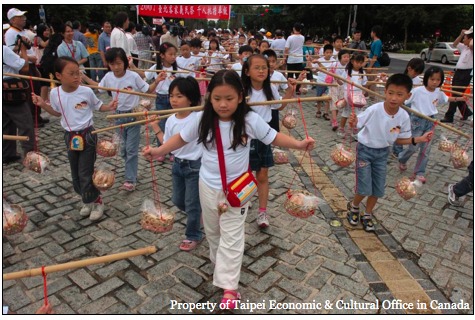 Children carry loads on shoulder poles to experience the Hakka spirit of diligence as part of the Yimin Festival. Hakka people form the second largest ethnic group in Taiwan. 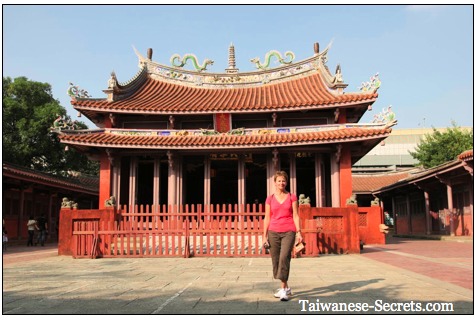 My mom stands in front of the Confucius Temple in Tainan City. Tainan, in the southern part of the island, is Taiwan’s temple capital, as well as one of the best places to sample traditional Chinese food. 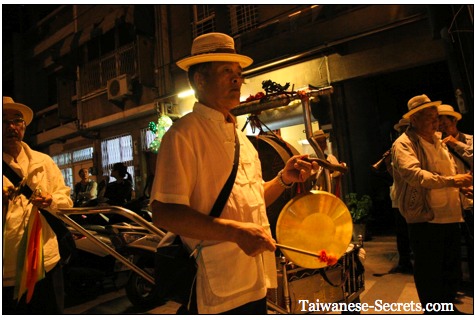 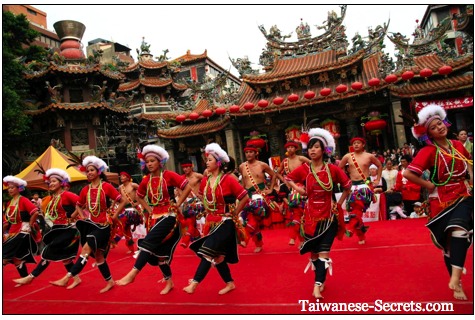 Taiwanese men and women perform a traditional Chinese dance in front of Zhenlan Temple, in Dajia, on the west coast of Taiwan. Dajia is one of those little towns where ancient Taiwanese culture is being preserved and celebrated. 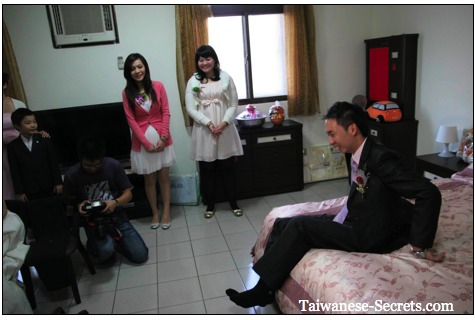 A very interesting traditional Taiwanese custom: On the day of his wedding, the groom has to walk and jump on his bed to ward off Chinese ghosts. 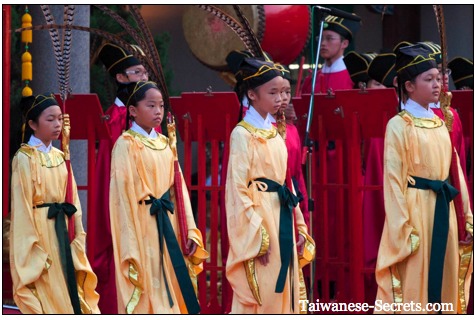 Taiwanese kids take part in a ceremony held on Confucius’s Birthday at Confucius Temple in Taipei. Confucius still has a very important place in Chinese and Taiwanese culture. His birthday is celebrated at various temples throughout Taiwan and China. 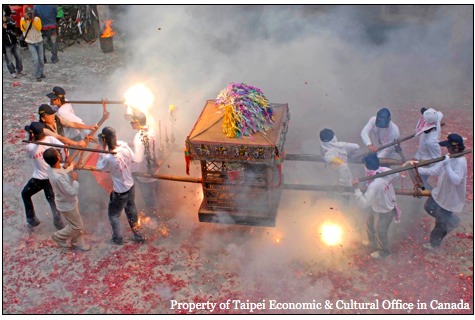 Matsu devotees rush through a sea of soul-purifying firecrackers as they carry the icon of the goddess housed at the Chaotian Temple in Beigang Township, in the central part of Taiwan, on a tour of the town to spread her blessing.

I would like to thank the Taipei Economic and Cultural Office in Ottawa, Canada, for giving me the right to publish these pictures of Taiwanese culture on Taiwanese Secrets Online Travel Guide.