Information about dangers and annoyances in Taiwan

This article about safety and crime in Taiwan won’t go into details about riding or driving in Taiwan. The road is by far the #1 threat to your safety (and life) on this island. Typhoons and earthquakes also have their own pages and won’t be discussed here.

Taiwan is without question one of the safest places you’ve ever been, unless you have one of those crazy panic rooms in your house. Violent crime is outstandingly low, theft is uncommon, and there are surprisingly few people that are “out to get you.”

Because of the non-stop, 24-hour eating culture, most streets and sidewalks are safe through all hours of the night, even for women. It can be a pretty shocking and reassuring sight to be drunkenly walking down a tiny alley at 4 a.m. and see a young woman comfortably strolling by in the other direction.

Places to avoid in Taiwan

That said, there are things that should be avoided. Trust your instincts when it comes to places like shady bars and nightclubs, as some of them can (though rarely) be fronts for gangs or other organized crime. Also, beware of “massage parlors” that have no windows or are otherwise slightly off-putting – massage parlors being used as covers for illegal prostitution are not uncommon. If that’s your thing, it’s definitely illegal so don’t expect the police to treat you nicely if something goes wrong while you’re inside.

What about drugs in Taiwan?

Drugs, including marijuana, are nominally highly criminalized in Taiwan, with the government making occasional examples of foreigners who break the laws. You might hear urban myths from expatriates about foreigners getting the death penalty for drug trafficking, or getting several years in prison for smoking some cannabis at a concert. Take these anecdotes with a grain of salt, but do keep in mind that if you get caught by a particularly surly cop there may well be repercussions.

If something does go wrong (and you’re not the one breaking the law), the police in Taiwan will most likely be very supportive and friendly but don’t expect them to quickly, if ever, resolve your case or find the person accused. Because of the lack of serious crime the police force is not really accustomed to tackling bigger offences. On the positive side, they are generally nice people and a far cry from the rampant corruption you will find in other police forces across the globe.

The police can be identified by their creepy-looking gray and maroon eagle shield crest, which will have “POLICE” clearly written in English. Emergency numbers in Taiwan are 110 for police, 119 for the fire department or ambulance, 113 for domestic violence or sexual assault, and there is also a toll-free, English-language foreigner service hotline at 0800-024-111. 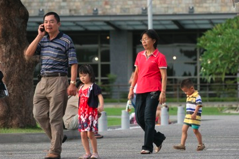 Public spaces in Taiwan are also quite safe. Pickpockets may make an appearance at huge festivals or night markets, but it’s exceptionally rare. Public transit, such as intercity trains, the Taipei Mass Rapid Transit (MRT) line or city buses, are also not to be worried about. Many of these services stop earlier than you may be accustomed to – for example the Taipei MRT stops running at midnight, even on weekends – and this no doubt helps make them a bit safer.

Many younger people, Taiwanese and foreigners alike, can be found drinking in parks all the way through to sunrise, unlike the dangers to be found in parks in the United States, South America, or basically most places in the world.

Taiwan security and crime – In conclusion

Overall, the most dangerous thing about Taiwan is that when you leave you may forget how to behave in a place that’s not as safe. After endless great experiences – drinking in parks, hiking up a mountain and setting up makeshift, having someone offer to drive you 15km on his scooter for free and generally not feeling afraid for your personal safety – going back to the “civilized” world can be a bit of a wakeup call.

Return from Taiwan Security and Crime to Facts About Taiwan