In Taiwan, food isn’t merely belly fuel – it’s a way to have a good time with friends and family. It’s a celebration of community and life.

An Introduction to Taiwanese Food

Food is an aspect of Taiwanese culture that is assuredly beyond any expert’s capacity to explain with fewer words than the number in Moby Dick (over 200,000, by the way).

One thing can be said in very few words, though: In Taiwan, food is as important as sleeping, working, and even breathing! This country truly has a “food culture” and a trip around the island, or around Taipei, is like a visit to the world’s best culinary museum.

Everything revolves around the topic of food in Taiwan from the customary evening snack with friends, to the more elaborate feasts held on special occasions and festivals like Chinese New Year and the Tomb Sweeping Day.

Food in Taiwan is an ever-expanding list of edibles that, while coming mostly from the same family as the majority of Chinese food, has the influence of the cultural variety that is part and parcel of Taiwan’s history. The specialties of the island’s aboriginal people and of Fujian Province in China both make huge contributions to the cuisine.

The mainland Chinese that fled to Taiwan in the 18th, 19th, and 20th centuries, the influence of the periods of Japanese and Portuguese colonialism, and the popularity of Western food can be tasted as well in Taiwan’s food.

Also, when thinking about the food of Taiwan and it’s origins and influences, don’t forget about the immigrants from Southeast Asia – Indonesia, the Philippines, Vietnam, Thailand – they all make appearances. 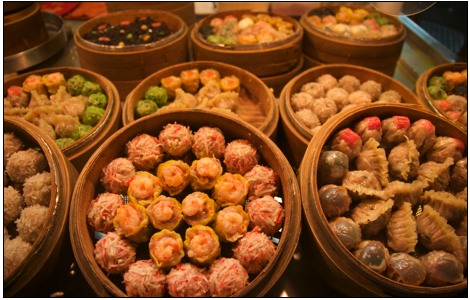 Taiwan’s unique geography of juxtaposed highlands and coastal lowlands, together with its tropical latitude, provide it with an incredible diversity of fruits, vegetables, sea creatures and other oddities that can’t found anywhere else. Trust me, Taiwan’s food is among the world’s richest and most varied.

This diversity is overwhelming to the point that Taiwanese people often don’t even know what they’re eating. If you intriguingly ask a local what something is, don’t be surprised if they simply respond “I don’t know either.”

The most important thing about the food in Taiwan is to have an open mind and an empty stomach, as the adage goes. Let your inhibitions go and eat something that is completely unrecognizable. That said, there are some standard favorites that will forever exist as part of the canon of edible things on Formosa.

Let’s do it like this – we’re going to follow a fictional Taiwanese man, Chen, throughout his day and observe what he eats. 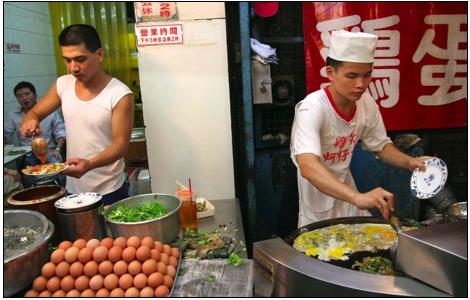 Chen woke up at 6:42, 12 minutes later than he should have. He threw on some clothes, accidentally put on the same tie that he wore yesterday, raced down the stairs and out the door of his apartment. On his way to work, he stopped at a local breakfast shop, adorned with a tri-color stripe pattern – the red, orange then yellow that is typical of morning eateries in Taiwan. He ordered a freshly made hot soymilk along with an egg pancake and a turnip cake. He was hungry.

After a few hours of hard work talking with various clients, making sales and running numbers, Chen was looking forward to his lunch break. All day he was thinking about what he wanted. Would he go for beef noodles, a quick fried frice, or maybe the simple buffetoption? Was he feeling like the cool, crisp sesame taste of cool noodles? Maybe he would just find a sandwich at the bakery next to his office building. In the end he decided on a couple pork-filled steamed bun and a pearl milk tea.

Feeling exhausted as he left work, Chen looked for a carbohydrate pick-me-up, and found it in a steaming hot luwei – a stand where he picked out the kind of noodles he wanted and all the vegetables and meats he wanted to include, and they cooked it all up for him.

Later that night, he and his friends decided to stop at the night market for some extra treats. One of his friends battled the day’s heat with a tsua bing, a shaved ice treat with mango on top. Another friend, the more Taiwanese among them, chowed down some pig blood cake and followed it up with a round of stinky tofu. Finally, Chen, full from a day of eating, was satisfied with only a cold papaya milk.

Mr. Chen might be fictional, but the reality here in Taiwan about food is very close to the story you just read. People seem to eat even more than Italians (I come from an Italian famil).

But here in Taiwan, it’s different. Taiwanese people have three meals a day, but there is always a snack or two or three, and huge cups of Chinese tea or other fruit drinks between those meals. I hardly ever say “I’m hungry” in Taiwan. Food is always available. You go somewhere, someone will offer you something to eat. You stay at home, a friend will call to ask: “wanna go for a snack?”

You cannot escape food in Taiwan!

At first, you might be uncomfortable to try new foods in Taiwan. The smells are strong, the textures seem weird, and even the way food is displayed is different than in the western world. But you should overcome your fear and try as many new Taiwanese foods as possible. I’m not saying you will like every dish. But I can guarantee that you will have many surprises and you might crave for some snacks when you’re back home…

Where can you eat cheap food in Taiwan?

Cheap food in Taiwan can be found everywhere, at any time of the day. Street stalls that sell cheap Taiwanese food like fried rice, wonton soup, stinky tofu, and Chinese noodles plaster the sidewalks of every Taiwanese city. Night markets are also famous for cheap, traditional Taiwanese food and snacks.

Here are my favorite night markets in Taiwan:

Fengyuan: The little street next to Fengyuan Temple is a great place to grab a bite at any time of the day. I think the name of the street is Miaodong.

If you don’t want to eat Taiwanese food…

Well, you’ll be happy to hear that Taiwan has many restaurants that serve international dishes. Italian, Japanese, Indian, French, and Thai restaurants are especially popular and can easily be found in the big cities like Taipei, Taichung, and Kaohsiung.

I hope you enjoyed this page about food in Taiwan!

More Links About Food in Taiwan

Taiwanese Tea
Taiwan isn’t just popular for its delicious food. Chinese tea also features pretty high on the list of what makes Formosa such a cool place to visit. More about tea in Taiwan here.