This is where you’ll find the capital’s heartbeat!

Let me be your Taipei travel guide – I’ll take you on a tour of the best religious sites in and around the capital. The city is packed with colorful temples and monasteries that are filled with the smell of incense and the sound of worshipers who recite scriptures.

Find the best deals and discounts on Taipei Hotels!

And that’s not it… Add to this a plethora of Chinese gods, noisy festivals, mythical creatures, fire-walking rituals, possession ceremonies, blasts of firecrackers and a touch of raucous music… now we’re getting closer to the real Taipei travel fun you deserve.

Welcome to the temples – where dragons come to life and ghosts are as real as you and me. You’re guaranteed a dramatic spectacle! 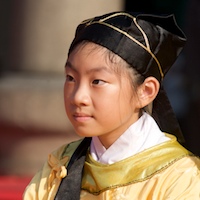 The Confucius Temple in Taipei is an unmissable sight. Established in 1925, this magnificent sanctuary was built in the classical Chinese temple architecture. With its sweeping roofs, subtle design, quiet parks and ponds, it’s a tranquil retreat from the commotion of the city. You won’t find the usual cacophony present in other shrines around town – no drums, no gongs, no self flagellation here.

If you are in town on September 28, don’t miss the ceremony that’s held at the temple for Confucius’ birthday. The ritual begins at 6am, but you should arrive at least 2 hours in advance if you want to see something else than people’s backs and heads. I know what I’m talking about – I got there at 5am and all I got was a spot by the washroom.

This classical event involves lonnngg, boring speeches made by the mayor of Taipei, old scholars and other stern-looking attendants. The uneventful lectures are sometimes interrupted by drumming, bowing, chanting and some dance performances made by children. The great fun of it all is to take pictures of the performers’ elaborate and colorful costumes. More about the Confucius Temple in Taipei… 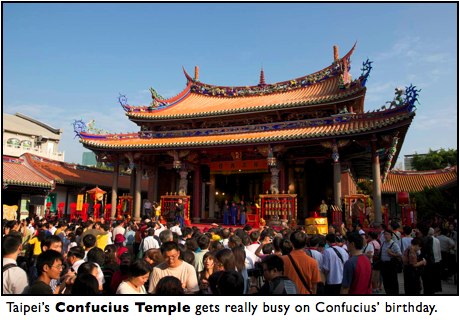 Baoan was built 200 years ago, and is right across from Confucius Temple. Apart from being neighbors, these two shrines don’t have anything in common. This is the place where you’ll see worshipers feed the gods with bags of sugar and cans of pop, as dragons and other mythological creatures watch from the ceiling and walls. A Taoist priest usually performs a short ritual around 11am on Saturdays. Read more about Baoan Temple in Taipei. 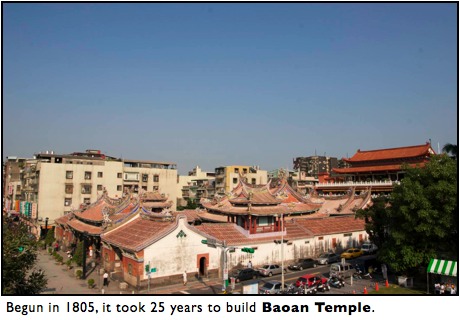 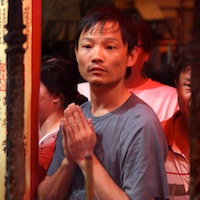 Here’s another one you really don’t want to miss during your Taipei travel. Longshan is Taipei’s oldest temple – it was built in 1738. No matter what time of the day you come, you’re assured to see hundreds of worshippers walk in to pay tribute to the many Chinese gods enshrined here (more than 165).

The Main Hall accommodates Guanyin, the Chinese Goddess of Mercy. People will travel to Taipei from all over Taiwan to catch a glimpse of the famed deity. Why is it that famous? The statue is said to have survived earthquakes, civil war, fires and even US bombings!

Early morning and late afternoon are the best times to come. The temple is at its busiest and you can see devotees wearing black robes chanting prayers. The temple is located in Wanhua District, the oldest part of the city. Walking around this area is one of my favorite things to do in Taipei.

Find out more about Long Shan Temple in Taipei. 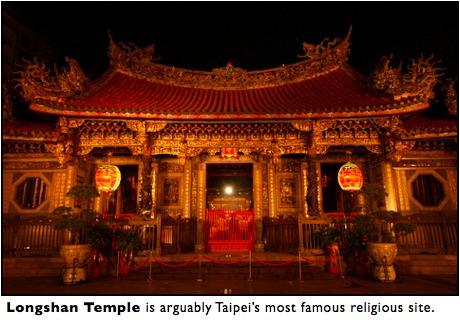 If you don’t have much time for your Taipei travel adventure, skip this one! If you’re not on a tight schedule, come check out this Japanese-built, nineteen story structure. Shandao Temple also has a museum that displays an extensive collection of Buddhist artifacts. If you’re into mediation and you’d like to find a quiet place, you can’t go wrong with Shandao’s main hall. It’s quite a restful setting. 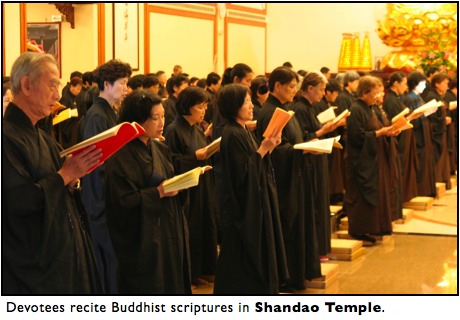 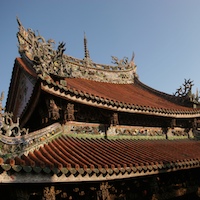 Built in 1769, this well known temple is most famous for its intricate carving and painting as well as for its annual divine pig contest. Many say that if you had to visit only one shrine in Taiwan, it should be this one. The temple is located in a little town called Sanxia, about 20 minutes south of Taipei city.

I had a blast there during Chinese New Year in 2009 when I came face to face with some weird aspects of an ancient Chinese religion.

I hope you enjoyed this Taipei travel expedition around the temples and monasteries. Click here to see all these attractions on my TAIPEI CITY MAP! A new window will open and you will see all the sights listed in the left column.

Return from Taipei Travel: The Temples to Taipei