Taipei Metro information for travelers. Understand how to use the subway in Taiwan’s capital city. See where the main stations are on our MRT map, and check fares.

Why you’ll love the MRT in Taipei

Getting around a city where you can’t speak or read the local language is usually quite a challenge. But thanks to its amazing metro system, Taipei City is an exception to that rule. Almost all points of interests can be reached by MRT. You rarely have to use the bus system in Taipei.

You’ll be happy to see that Taipei’s subway is cheap, clean, safe, and easy to use. The only thing you might dislike about the city’s metro is its main station, which can be intimidating due to the huge amount of people who crowd it, especially during rush hours and on weekends. 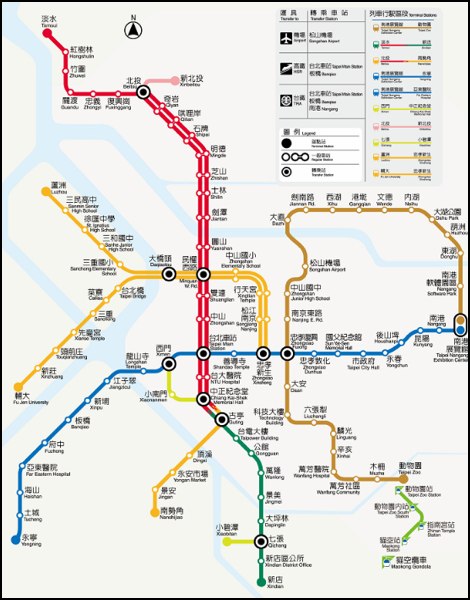 Fares for the metro in Taipei are based on the distance you travel. The further the distance, the more expensive it gets. The cheapest price for a one-way ticket is 20NT$ and it goes all the way up to 65NT$. In all the stations, you’ll find machines where you can purchase single-trip tickets. Day-passes are also a great way to save money on transport by subway.

If you plan to stay in Taipei for a few days, the EasyCard is the best option. You get 20% discount when you use the Taipei MRT EasyCard. You can get one at information counters in all Taipei Metro stations as well as in most convenient stores (7-11, Family Mart, Hi-Life, OK Mart).

You can travel throughout Taiwan with the EasyCard – it is not limited to Taipei. Another big advantage about having it is that you don’t have to search for change or wait in line to buy a ticket. You can add value to the card, you don’t have to buy a new one when it has no money left on it.

Most lines operate between 6:00am and midnight.