A cultural journey in the unexpected capital.

When I first visited Taipei City, back in 2000, I was expecting just another boring, grey Asian metropolis without a soul. At that time, I had no idea that Taiwan’s capital was home to some of the best museums and memorials in Asia.

See where I book my hotels in Taipei, Taiwan!

And I’m not the only one who’s had misconceptions about the island and it’s capital. Whenever I talk about Taipei’s attractions and sightseeing to people outside Taiwan, I always get suspicious reactions like: “Really?! I thought Taipei was just an industrial city.”

Are you also skeptical? Ok then… Read on! I’ll show you what I mean by “best museums and memorials in Asia”. Have a nice tour!

After visiting the National Palace Museum in Taipei, you can check out the following touristic sights: 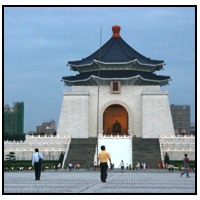 You just can’t come to the capital and not visit the iconic Chiang Kai-shek Memorial Hall and its aesthetic arched entrance. Located in the heart of Zhongzheng district – old Taipei – this imposing landmark stands at the end of an expansive plaza, where locals and visitors gather at all times of the day.

It’s an unbeatable spot for photography. Kids fly their kites, elders practice tai-chi, lovers stroll hand in hand, activists display banners, students chant, and guards march as people from the four corners of the world walk around in disbelief… Am I really in Taiwan?!

The two giant classical Chinese buildings in front of the memorial are Taipei National Theater and National Concert Hall. 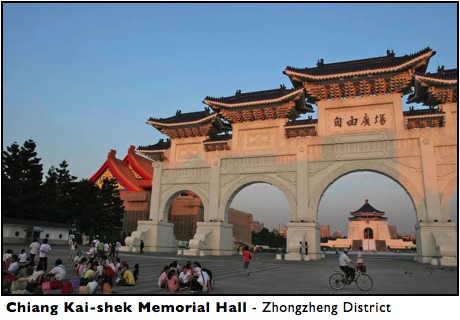 Whenever I have some free time in Taipei City, I go stroll around the large public park that surrounds this massive hall. It’s another great venue to do people-watching, or just kill time with strangers while sipping a latte. You should go late afternoon, when the sun falls behind the city and paints the giant roof with warm shades as the place falls silent for the changing of the guards.

The exhibition area inside the hall is definitely worth checking out if you care to learn about Mr. Sun – the father of modern China. The museum has some very interesting historical photos. If you’re pressed by time, make it at least to the hall’s main entrance to see the 6-meter-tall bronze statue of the man.

Read more about the Sun Yat-sen Memorial Hall in Taipei. 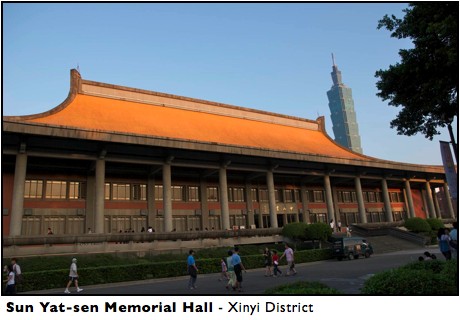 You’ll find the galleries of the Fine Arts Museum in the lively, modern Zhongshan District. Constructed in the 1980’s, the museum showcases local and international contemporary art. It has both temporary and permanent exhibitions.

If you’re not into watercolor, sculptures, calligraphy, or art in general, skip the galleries and simply go for a walk around the vast Zhongshan Fine Arts Park, right outside the museum. The funky architecture of the building itself is worth the trip.

Read more about the Fine Arts Museum in Taipei, Taiwan. 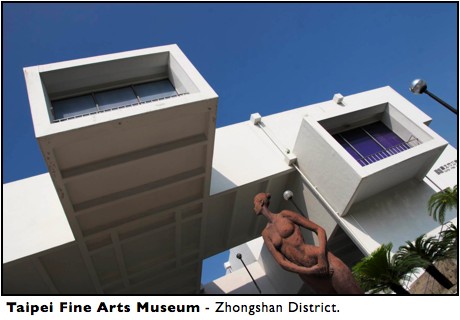 If you walk south from the train station, you’ll come to the 228 Memorial Peace Park. At the park’s north entrance you’ll find one of the island’s finest colonial buildings. This old museum was completed in 1915 and hosts a collection of over 40,000 itemsranging from aboriginal artifacts to prehistoric pottery and tools. Kids will enjoy the exhibition dedicated to Taiwan’s animals and plants.

Taipei City’s East Gate (also called Jingfu Gate) is situated on Ketagalan Boulevard, between CKS Memorial Hall and the presidential palace. Nighttime is the best moment to take pictures of this historical structure, when the roof is lit and cars paint trails of light all around the busy traffic circle. 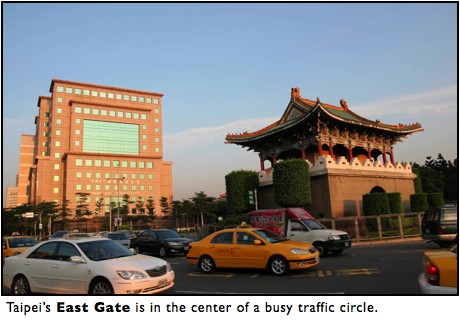 Click here to see all these attractions on my TAIPEI CITY MAP!
A new window will open and you will see all the sites listed in the left column.

Return from Museums and Memorials to Taipei City