The Taipei 101 Tower offers one of the most stunning
view in the world! 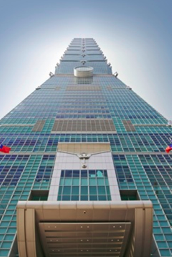 When you get to Taipei, the most obvious landmark is Taipei 101 – the second-largest building in the world, named after the 101 floors it contains, dwarfs the otherwise low-flying skyline.

The building is a symbol of Taiwan’s development, and the architecture that was built with the image of bamboo in mind relates that movement to the history of Taiwan.

The Taipei 101 building is massive, and just to see it up close is a treat. It also features the fastest elevator on the planet, abruptly bringing you to the top for a glance at the city that surrounds it.

Seeing the building itself and going to the top are the most worthy reasons to make a stop at the Taipei 101 building. The inside of the Taipei 101 tower is mostly high-end shopping. While it is some of the best in Taipei, i”s nothing you can’t do anywhere else in Asia.

The Taipei 101 building’s food court might be worth a visit as it gives you a convenient sampling of a variety of the different cuisines available in Taipei. Various food stalls offer Japanese cuisine, curries, Taiwanese luxuries, and of course Subway.

Page One bookstore on the fourth floor has a huge selection of English books.

Bottom line: Check out the building, take a ton of photos, wait in line to take the world’s fastest elevator to the top, take a ton more photos, do some shopping if you’ve got cash to spare, buy an English novel or magazine.

Where is the Taipei 101 Building?

How to say it: taibei yi ling yi

Facts about the Taipei 101 Tower