Tainan is the place to go if you want to experience the classical side of Formosa. It’s a living museum where every alley can show you a slice of history. Established in the 17th century, it was the capital of Taiwan during the Qing Dynasty.

To this day, the city retains ancient architecture, old religious festivals, and temples, stores that were opened a hundred year ago, and locals who practice arts and crafts passed down by ancestors. No doubt it’s referred to as the Kyoto of Taiwan!

We’re here for the food, of course!

“Why are you here?” is a question I always ask travelers when I meet them on the road. “We’re here to eat, why else” is the typical answer I get from tourists in Tainan. The city is not only considered to be the cradle of traditions of the country – it’s also a highly popular food destination!

Asian and local tourists line up at popular restaurants and night market stalls ANY time of the day. The ratio of places to eat per capita has to be one of the highest in the world. The amount of tea shops, street food venues, stalls, sidewalk-eateries, and food alleys is mind-blowing.

Best Attractions in Tainan – Things to Do

Tainan is packed with touristic sights such as temples, museums, night markets, and even a fort where you can learn about Taiwan and China’s military past. There are enough things to do to keep you busy for at least 2-3 days. Here are some places you’ll want to include on your Tainan travel itinerary:

Welcome to Taiwan’s oldest Confucian Shrine! Of all the Confucius temples around the island, this one is my favorite. The halls are set in front of a vast park filled with huge banyan trees where people chat, fly kites, paint or just walk around. There’s no better place to be on a sunny day when the temple’s pink walls contrast against a deep blue sky.

Tainan’s Confucius Temple is right in the heart of the busy West Central District. If possible, try to get a room in the vicinity, as most attractions are within walking distance from here.

Remain of Tainan’s old defences. From the Confucius Temple, it’s only a short walk along Nanmen Rd. to get to the Great South Gate. The massive double gate was completed in 1835. Set in yet another pleasant park, the giant structure is a reminder of Tainan’s military past as well as one of the most photogenic attraction in town.

300-year-old Fahua Temple is also worth a detour. The monk on this picture told me he spent his entire life at the temple. “I was born to be a monk,” he said. “When I was a kid, I used to come here to recite sutras while my friends would stay home to work and play.” Although he doesn’t speak English, he’s always happy to take visitors around the shrine. Fahua is a quiet tourist attraction that doesn’t get as busy as Confucius Temple, so it’s a great spot to soak in the culture without the crowds.

Extremely popular with Chinese tourists from the mainland, this memorial is dedicated to Koxinga – the Ming Dynasty general who kicked the Dutch out of Taiwan in 1662. You can see a statue of the man in the main hall as well as tablets commemorating his army along the side corridors. A small museum by the shrine has traditional Taiwanese puppets on display.

While I was visiting the temple, a devotee explained to me: “City God is the afterlife judge. He keeps account of people’s moral behavior and decides how one should be rewarded or punished.”

The large abacus in the main hall is said to help City God calculate people’s good or bad deeds. The torture instruments and graphic images of hell are also quite interesting sights.

Set in an attractive neoclassical building that used to be Tainan’s City Hall, this museum showcases exhibitions that detail the progression of Taiwanese literature since the Japanese occupation. For most, the building’s architecture is the main interest. It was built by the Japanese in 1916. Most displays have English descriptions. It’s just a short walk north of Confucius Temple. 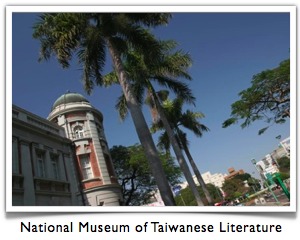 Due to its central location and its proximity to lots of good restaurants, this popular landmark seems to attract more tourists than any other attraction in town. Even if you don’t like crowds, you should still put Chihkan Towers on your travel itinerary.

When you enter the site, take a right to make your way to the pavilions. You’ll see a statue of a helpless Dutch bowing his head in front of a powerful Koxinga.

Climb up the two Fujianese-style pavilions to get good views over the city. The nine tablets lined up on the back of stone turtles at the base of the first pavilion date back as far as 1786. They were sent by the Chinese Emperor of that era.

You simply can’t miss this striking temple with its pink-colored walls as you walk on Minzu Rd. The original shrine, dedicated to Guan Di, was built in 1690. 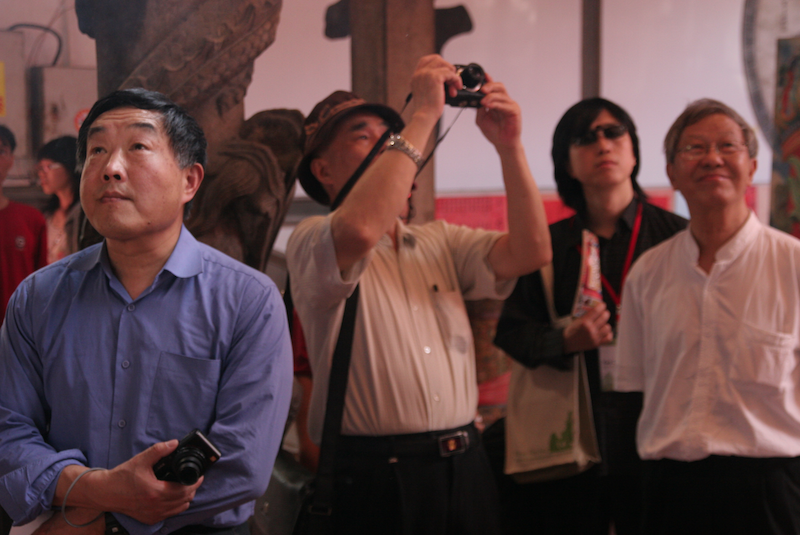 Established in 1662, this is the oldest Matsu Temple in Taiwan. And it’s such a lively place. It seems that every time I visit it, there’s a ritual that’s being held where giant Chinese puppets dance, gongs are beaten and joss money is thrown up in the air amidst the sound of exploding firecrackers and traditional Taiwanese music.

Being a coastal city that used to be dependent on fishing it’s understandable that Tainan should have a special liking for Matsu, the Goddess of the Sea. The city has no less than 17 temples dedicated to the deity.

Also called Fort Zeelandia, this impressive bastion was originally build by the Dutch in 1653. All that remains from the original structure are a few crumbling walls that used to make up the foundation. The streets around the fort turn into a lively market on weekends and the entire area enjoys a carnival atmosphere as hundreds of Taiwanese tourists show up to buy snacks and play games.

Yet another temple dedicated to the Goddess of the Sea. This one is right by Anping Fort and is always packed with devotees.

Look for the fortune teller by the main altar – he’s quite a funny character. Point your camera at him and watch his reaction. Don’t worry, he won’t get angry – he likes attention!

Taiwanese opera performances are often held on the parking lot in front of the temple. Careful if you see the performers walking on the stage with bottles. They sometimes throw alcohol in the crowd. It’s supposed to ward off evil spirits.

The fortress is set in the biggest and most beautiful park I’ve seen in Taiwan. Unsurprisingly, tons of Taiwanese flock here on weekends to stroll around the fortifications.

It used to be an important piece of Taiwan’s defense against the Japanese. Military buffs will enjoy the cannons on top of the citadel. Photographers will want to shoot the front gate early morning. I highly recommend to walk between this site and Anping Fort.

I recommend to every traveler to stay in the core of the old district downtown, which is called the West Central District 中西區. This area has got everything to keep you busy for an entire week of exploration, eating, drinking, and shopping.

This is where I’ve been staying the past few years, as one of my Pizza Rock restaurants is right next door. Lakeshore Hotel is central, modern, clean, and quite luxurious. The rooms are well designed and practical. The beds and pillows are amazingly comfortable.

The buffet for breakfast is the highlight of a stay here. It’s got absolutely everything you can imagine, bacon and eggs, Asian, steak, pasta, salads, cold cuts, huge variety of cheese and bread… Lakeshore is not cheap, but it offers a super great experience and I highly recommend it!

Tainan Transportation, Getting There and Away

By train: Tainan’s train station is located in the northeastern part of the city, about 1km away from the Confucius Temple and Chihkan Tower.

The following fares and time travel are for the fast trains (also called Tze-Chiang).

By Bus: UBus has a station right next to the train station at #2 Beinan Rd. Buses for Taipei cost NT500 and take between 5 to 6 hours depending on the traffic situation.

Tainan Airport is only 5km away from the city center and has regular flights to Taipei and Kinmen. The High Speed Railway Station (HSR) is a very frustrating 30 minutes south of the city.

One of the most popular areas to find traditional food in Tainan City is around Chihkan Towers. There you’ll find everything from fried rice to dumplings sold at street stalls, as well as other local specialties such as Dan Zai Noodle. If you walk around the city, you’ll pass dozens of Taiwanese, Chinese, and even Japanese restaurants that offer in BBQ, hot pot, quick stir-fries, and even western food like pizza, burgers, and steak.

I don’t even know where to begin. There’s a shitload of bars and drinking holes in this city. If you want to hangout at one of the expat places, then you should check Trip Advisor. If you want to see where the locals drink after work, or on Saturday night for a solid Sunday hangover, check out these places:

I found this place by pure luck (or bad luck)? I had booked a room at the Premier Hotel, because it was one of the only places to stay available downtown that Saturday night. Cosby Saloon happens to be in an alley next to the hotel. As I went back to my room, after walking around town, around 1am, I could see people completely hammered, by the road, so I decided to walk down the alley to investigate. That’s when I found Cosby Saloon. Walked inside, felt at home right away. Old style wooden bar, rock music, bunch of local dudes chatting and smoking on stools.

On the way to Cosby Bar, you will pass about 5 little dinking holes, in what I have now officially coined as the Bar Alley. I can promise you only one thing: you will never see a single foreigner / expat in any of those places. This is local Tainanese territory, and that’s exactly why you’re wanting to get your ass there for a drink. 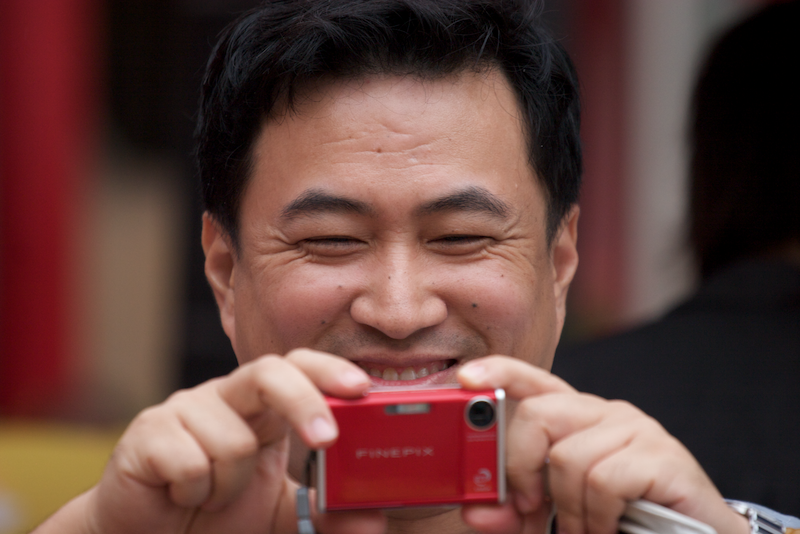