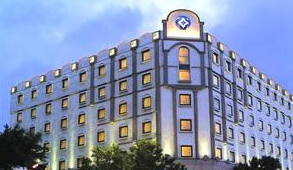 Info About the Riviera Hotel Taipei

I’m hungry: Restaurants at the Riviera Hotel in Taipei have a distinctly Western feel – there is the Prime Rib Steakhouse and the Yacht Club (although the Yacht Club does offer Chinese dishes). There’s also the Terrace Lounge for afternoon tea or evening drinks.

The Taipei Hotel Riviera is a bit North of where all of the financial action happens in Taipei, and that can definitely be a good thing. It’s near Yuanshan MRT stop, making it easy to get to cool spots like the Taipei Fine Arts Museum or the Confucius Temple.

One of the best parts of the Riviera Hotel is that it offers complimentary shuttle service to many of the most interesting tourist spots in Taipei, including Shilin Night Market (the biggest in Taipei) and Taipei 101. It even has free shuttles to the National Palace Museum, which is awesome because that place is really annoying to get to via public transit. If you are coming during an international trade show, the hotel also gives free shuttles to those on the mornings of the events.

The Riviera Hotel’s room decor and feel is not as modern or hip as a lot of Taipei hotels; classic hotel standbys like elaborate floral patterns and washed-out marble headline instead.

The Hotel Riviera has a gym but doesn’t offer spa or sauna services, so if that interests you, think again. In short, if you want to be a bit out of the city and within striking distance of some more interesting tourist spots, the Riviera in Taipei is worth looking into.

Visit HotelsCombined.com now to check current room rates and book your stay at the Riviera Hotel Taipei. Hotels Combined has a very reliable hotel booking system and I’ve used their website for years. From there, you’ll also be able to find tons of other quality hotels in Taipei and Taiwan.

Return From Riviera Hotel Taipei, Taiwan to All Taipei Hotels