In Taiwan, nearly every city is famous for something. Yilan has onions, Yingge has pottery, and Sanyi has wood.

In Pinglin, the claim to fame is tea, particularly that of the acidic, rich, green Bao Zhong variety. The tea is harvested in the Spring, so if you get a chance, try to make it during April or May for the freshest of the fresh.

Book a hotel in Taiwan today!

Pinglin is in the Southeast of New Taipei City (formerly known as Taipei County), and is not far from Xindian MRT stop at the southern end of the green line in Taiwan’s capital, Taipei City.

Still, Pinglin has some great natural beauty and a big network of bike paths for an escape from caffeine. The area lies in a water-source conservation area, so its natural life is just that much fresher than that of polluted, highly urbanized areas elsewhere in Taiwan like Taipei, Taichung, and Kaohsiung.

Pinglin Attractions / Things to Do

Pinglin Tea Museum
Claiming to be the biggest tea-dedicated museum in the world, this is definitely the stop for those interested in tea, the world’s first global commodity. The museum highlights not only the tea-making and tea cultivation processes, but also enlightens visitors on the role tea has played in Chinese history. For a firsthand experience of that history, the museum also includes a traditional Southern Chinese style garden and tea house.

JinGuaLiao Bike Path
Its Chinese name is something like “Biker’s Paradise,” and it gets the name not for the length or challenging bike route but for the striking scenery. The path takes you along the Jingualiao River with its clear water and surrounding mountains setting the stage for a comfy trip. Officially the bike path isn’t very long (about 2km), but the area is more than rife with other secluded, bike-able roads for those interested. Jingualiao Street has a number of bicycles rental shops for travelers.

Pinglin Old Street
Once you’ve learned about the history of tea and spent a good couple of hours exploring the tea fields on bicycle, you might be interested in purchasing some of the stuff to enjoy back home. Most of the tea sold in Pinglin Old Street shops comes from the local area, but it might be worth double and triple checking with the shop owners to make sure you don’t get swindled.

Getting Around Pinglin / Transportation

From the bus stop, walking to the museum or Old Street is very close. Obviously, if you want to experience the bike paths, renting a bicycle on Jingualio Street will be necessary, unless you were hardcore enough to ride all the way to Pinglin in the first place.

As you might have guessed, Pinglin is full of tea houses serving up the local Bao Zheng specialty. Because the town is accustomed to foreign tourists making their way in to see the sights, many of these restaurants will have English translations of their menus.

Vanilla Cafe
A coffee and tea house that is a kilometer or so west of the museum, this cozy joint has elaborate coffee drinks, breakfast and lunch. It would serve as a great stop if you are on a bicycle stop.
No. 232 Shuiliujiao Rd., Pinglin District

Yang SenGu
Slightly closer to the action is another tea house with rows of picnic tables surrounded by greenery. As long as it’s not pouring outside, the outdoor seating is as relaxing as it gets. The dishes here tend toward the gourmet side of things.
No. 15-2 Renli Slope., Pinglin District 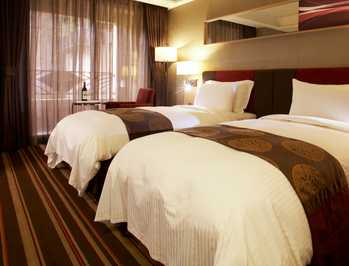 There aren’t many places to stay in Pinglin, it’s mostly done as a day trip from Taipei. A Chinese web search for hotels rendered almost nothing, so if you absolutely must stay overnight in Pinglin, do your best to find the cleanest place available. Otherwise, I recommend you make your way back to nearby Taipei or Keelung instead. After all, it’s very easy to get to and from Taipei.

One hotel that gets consistent reviews is the Fulon Hotel in Shenkeng, not too far from Pinglin (15km away).

Making it to Pinglin from Taipei is quite easy. Take the Xindian MRT line (dark green) all the way south, to the Xindian stop. Exit the station and head to the bus stop past the 7-Eleven. The buses come about once every hour on weekdays and once every 30 minutes on weekends.

An alternative option for bike enthusiasts is to cycle from Taipei, following the Riverside path to Xindian and from there to Pinglin. Altogether, it’s about a 30km cycle from the center of Taipei to Pinglin.

Other Destinations in North / East Taiwan