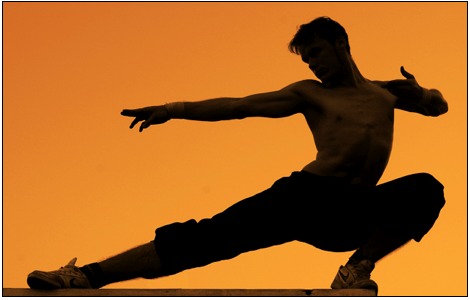 Stereotypes about Asian culture might lead you to imagine that everyone on the street will be a martial arts master, patiently waiting to put you into an inescapable grapple hold and wrestle you into submission.

Well, this is clearly a huge exaggeration. Chinese Martial arts have certainly played an important role in Chinese and Taiwanese history, though. Historically, they were used as a military training device in ancient China. The methodology of hand-to-hand combat and use of weapons was to give ancient Chinese soldiers an advantage over the general population.

History of Martial Arts in Taiwan

Taiwan has often served as a safe-haven for old traditions that have been forced out of the mainland, particularly in the time of the communist Cultural Revolution, during which Maoism aimed to rid itself of any connection to religion or spiritual practices. On the other hand, repressive Asian governments like that of Chiang-Kai Shek usually tried to make sure their people didn’t get too skilled at hand-to-hand combat, as this could have represented a threat to the state. Many of the classic rebellious groups in Chinese history started out as harmless-looking martial arts classes, so these leaders feared being too relaxed on the issue.

Martial Arts in Taiwan – Out of Style?

Moving to the present, martial arts has fallen out of style in the past several years in Taiwan, and not because of any dictators. Martial arts were often used as a method of developing character, discipline and creating balance within children. Today, Taiwanese parents have started to react to their country’s successful economic position by managing their children’s free time differently.

Chinese martial arts may well have been an essential extracurricular activity of times passed, but today in Taiwan, math, English, piano and swimming classes take the lead. Indeed, as Taiwan is one of the safer places in the world, Taiwanese parents can perhaps afford to have their child worry more about getting every question correct on a math quiz rather than about getting beat up at school.

Tae Kwon Do is Popular in Taiwan

On the other hand, one can easily spot martial arts centers sprinkled here and there throughout Taiwan, with the children inside grunting and hammering away at the air. Tae Kwon Do originally a Korean invention, is one of the more popular forms of interaction with the martial arts in Taiwan. If you spot a Korean flag logo for a store or shop, it will either be a delicious bibimbap stop for Korean cuisine or a Tae Kwon Do dojo. 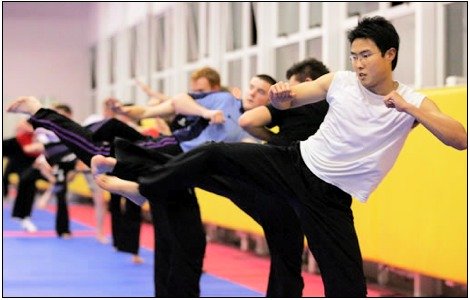 The most prevalent form of martial arts in Taiwan, and that for which it is the most famous, is undoubtedly Tai Chi. Walking around a park in Taiwan you can spot dozens of older men methodically manipulating their limbs into different positions. Tai Chi often, though not necessarily, is very slow-moving and has little or no actual contact.

Tai Chi classes in Taiwan are often held in public parks also, and you can spot seemingly hundreds of little ladies following along with an instructor for an evening exercise session. Visiting Chiang-Kai Shek Memorial Hall in Taipei in the early morning hours is certainly a sight, with hundreds of Taiwanese taking part in a morning Tai Chi ritual in the massive open space in front of the building dedicated to Taiwan’s ex-autocrat. 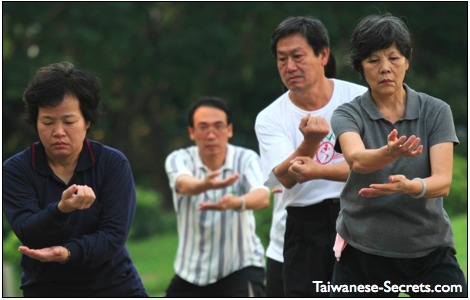 Martial Arts for Foreigners in Taiwan

Today, surprisingly, many of the more intense and violent forms of martial arts in Taiwan are being revived by foreigners living here. If you are looking to study Brazilian Jiu-Jitsu, Mixed Martial Arts or basically any art of systematically taking somebody down, chances are it will be taught by an expatriate who studied with masters at home.

Taiwan, therefore, may not be the best place to learn the actual practice of doing martial arts without some heavy searching. If, however, you’d like to learn about the history and theory behind it, there’s no shortage of that to go around.

If you’re reading this article and feeling a little down because you were hoping to learn martial arts in Taiwan, know that there is another kind of Asian study you can do in Taiwan: Mandarin Chinese!

Taiwan is one of the best places in the world to enroll in a Chinese course. Read more about studying Mandarin Chinese right here!

Return from Martial Arts in Taiwan
to Taiwanese Culture Articles