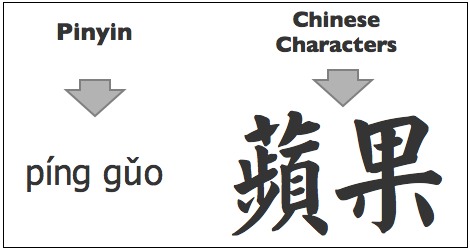 For most new Mandarin students in Mandarin language classes, the most daunting aspect of the Chinese language is the written system.

Since Chinese relies on a set of ideographic characters, rather than an alphabet system, it literally takes years to learn every Mandarin character you would need to recognise just to read a daily newspaper. A lot of new Chinese students also feel compelled to ask, “How will I know how to pronounce Chinese words just from the characters?”

The answer lies in Pinyin.

Pinyin, as it is also known in English, is the ultimate tool when you begin to study Mandarin language. Essentially, Pinyin is a system of writing down Chinese using Roman (English-type) letters. It also incorporates the four tones of Mandarin language through a set of four tone markers placed above the vowels on each word.

Where does Pinyin come from?

So where did Pinyin come from and how does it work? Pinyin was developed in the 1950s by the government of China and has become the standard Romanised system for Mandarin language in both Taiwan and Mainland China.

Earlier Romanisation systems existed in China prior to that time, such as the Wade-Giles system, and some of those archaic forms still exist in familiar words like “Peking” (Beijing) and “Szechuan” (Sichuan).

These early systems were based largely off of the impressions that the first Europeans got of the Mandarin language when they arrived in the 1800s. However, Pinyin is a much more accurate system, thanks to the fact that extreme care was taken in deciding upon which specific letters would represent specific Chinese sounds.

Learning Pinyin is quite easy, and it is usually the initial thing that people who are studying Mandarin language for the first time will encounter. It is important to have a firm basis in Pinyin before beginning to learn the characters, since Pinyin can provide you with a true sense of what the Mandarin language really sounds like.

It will also help you in writing down the Mandarin language before you are fully fluent in Chinese calligraphy and it will give you a foundation for pronunciation when you encounter a Chinese word that you are not familiar with. Pinyin can also help you search for words in a Mandarin dictionary!

The Basics of Pinyin

Since Chinese is monosyllabic, meaning that each word only contains one syllable, most Pinyin words are not longer than three to four letters each, with the longest being up to five letters. As you learn Pinyin for the first time, you will learn it like an alphabet, practicing the pronunciation of each initial, followed by the types of finals that are likely to follow it.

Pinyin is incredibly useful in the study of Mandarin language, and it is a system utilised by both foreign and overseas learners of Chinese, as well as native Chinese students learning the language as children. Though Chinese children gradually learn the Mandarin character system over the course of time, Pinyin is still used for inputting Mandarin language into computers and mobile phones, as well.

Facts About Mandarin Chinese
Mandarin Chinese language is spoken by more than one billion people around the world. Mandarin is written with symbols. There are over 100,000 Chinese characters… Read more here!

What’s Difficult About Learning Chinese Language?
Learning Mandarin Chinese can be challenging and frustrating. Read on to see what’s tough about learning this beautiful language.