Why would anyone go to Orchid Island
during a typhoon!?

Last year, I had one hell of a crazy (read stupid) adventure on Lanyu (Orchid Island) with my friend Ben… 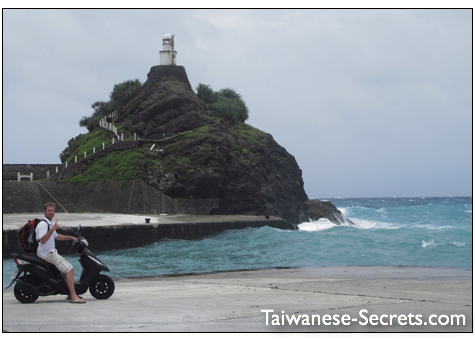 We were sitting at my restaurant, in Taichung, it was around 5 or 6 o’clock in the evening, we were sipping beers and chatting, then the conversation turned to Lanyu. Ben is the only guy I know who will go on a trip instantly, on the spot, without having to prepare or plan anything. I proposed to go, he told me Ruby would never let me leave. She was at the cash register, I asked her to come sit with us. She knew I was gonna ask her for a favor… Can I go? She said yes without hesitation, to my surprise! She said we had been talking about going on a trip to Lanyu for too long and that we should go tonight. I went home to get some stuff, Ben did the same, then we met at the HSR station, just outside Taichung City. 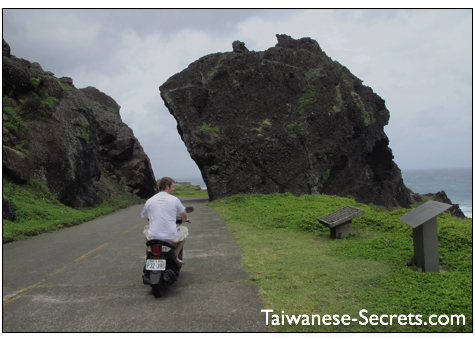 I bought some beers at the 7-11 at the station. Ben wasn’t boozing, he said he was not feeling good. We took the high-speed train all the way to Kaohsiung City, in the southern part of Taiwan, then took the metro to get to the main train station downtown, to take the normal train (TRA) all the way to Taitung. We matched the connections perfectly and were in Taitung in just under 4 hours and half. Not bad. 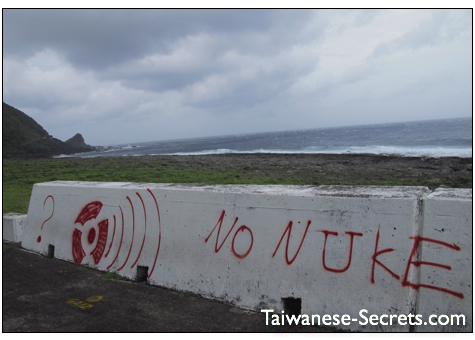 We walked around town, trying to find a hotel. We were planning on taking a morning boat to Lanyu. We asked a young guy who was working at the front desk of a random hotel if he could book us some seats on a boat. He looked at us as if we had asked him how to go to the moon. Then he started laughing and said: “There’s no boat or flight services to Orchid Island, there’s a huge typhoon coming!”

A what!?! A typhoon!? How could we have not read or heard about it? I thought it was a joke. I checked the Taiwan weather bureau website and found out it was true. Not only was it true, it was also a pretty big one with a perfect circle shape and the latest satellite images shown it was like… going straight toward Lanyu. Talk about being lucky. 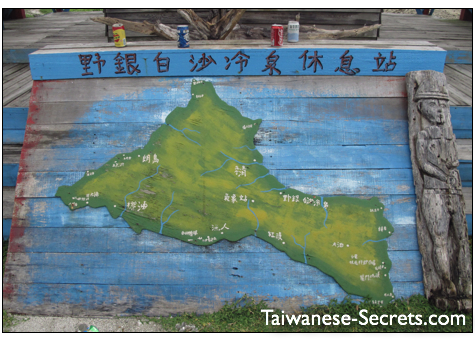 Somehow, after learning that our plan to go to Lanyu was scrapped, we had the original idea to head to a Family Mart convenience store and play Scrabble, outside, in the now obvious wind, and drink more Taiwan Beer. I don’t quite remember why we decided to not sleep and stay up instead. Anyway, after a long game, the sun came up, and a taxi driver started chatting with us. We told him about our predicament, but he then told us that one last boat was going to leave Taitung in about an hour.

Ben and I jumped in his cab, headed straight to Fugang Fish Harbor, just outside Taitung City. We bought some more beers, boarded a tiny boat, and were surprised to see half a dozen other travellers on board. They were sitting inside. We sat outside, and the boat took off. As soon as we left the harbour, hell broke loose! 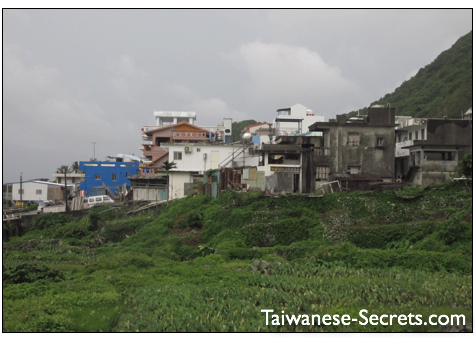 The waves from the Pacific Ocean were gigantic! Like 2 storey-high. The first thought that crossed my mind was to go convince the captain to turn around so I could get back to shore. Every time we went through a wave, the boat felt like it was gonna break in pieces. It was so violent. When we hit the water after surfing down each wave, the whole boat was swallowed by sea water. Standing was impossible. Walking would have been suicidal. We had to hold on so hard to our seat to not end up on the ground, or worse, be ejected from the boat. After a while, we managed to get inside the boat. The whole cabin smelled like vomit. Everyone, I mean EVERYONE was puking everywhere; in bags, on the floor, on the seats, on themselves… It was gross, and I remember thinking: “This is not the best place to die.”

Happy to have found what seemed to be a safer place, I started making fun of Ben: “You’re gonna puke… You’re gonna vomit… Ha ha ha…” Couple minutes later, I’m the one who was emptying my gut in plastic bag after plastic bag… 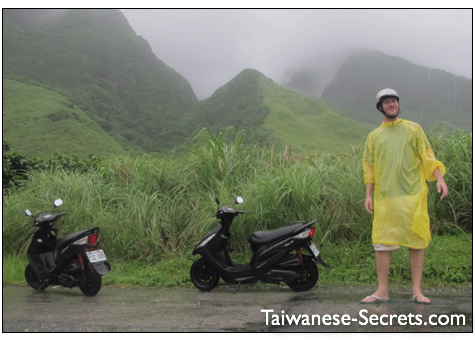 We arrived at Lanyu after about 4 hours or hell on the sea, and it took the captain some serious skills to navigate into the “safety” of the tiny harbour. As we got off the boat, we saw a long line of people waiting to get back to the main island (Taiwan). We rented scooters, got a small room at a hostel (more like a BnB), and went on the road to explore wild Orchid Island. By that time, after all the beer, the sleepless night, the adventure at sea, and puking so much, I was dizzy (not drunk!), dehydrated, tired, and I started having a fever. 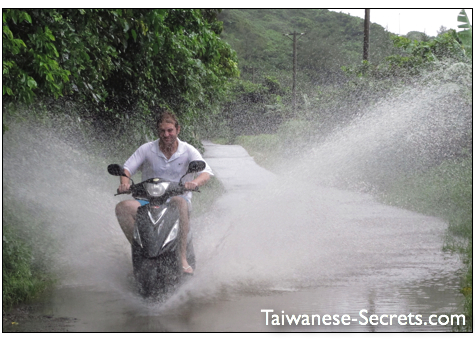 After each turn along the coastal road, more and more amazing scenery unfolded, steep mountainside that dropped into the sea, tunnels, caves, goats. Goats? Yes, there are tons of wild goats on Lanyu and you can even get a fine if you kill one on the road with your scooter or car (at least you get to keep it!) On our first day, we rode along a narrow path all the way to the top of what seemed to be the highest point of the northern part of the island, where there’s a weather station. It was almost impossible to stand, the wind was so, so, so strong! Ben’s 7-11 cheap yellow rain-shell ripped from his body from the sheer power of the wind. I remember standing at an angle of almost 45 degree, leaning against the wind, it felt like flying. 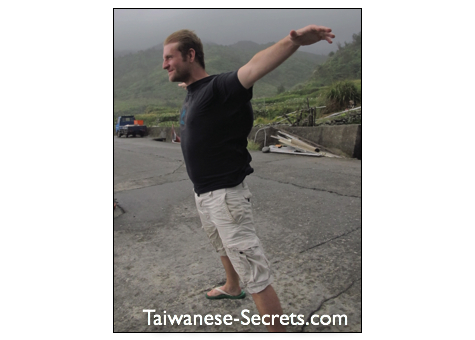 Later, back in town, we tried to get money from the only ATM machine on the island, at the post office, but it was out of order. I had to call my wife and ask her to wire money to the guesthouse where we were staying. It was all very complicated.

To make a long story short, the rest of our trip we rode around the island, visited the nuclear waste storage facility (outside), saw an old Tao man in his traditional loincloth, lots of goats, walked in caves, had a beer in a small village on the east side of the island, then headed back to our hostel where we learned that all the boats and planes were grounded and that we were stranded on the island. 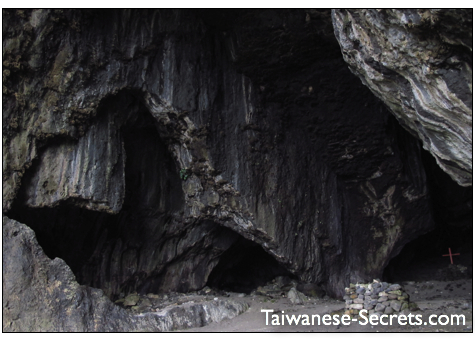 At night, our hosts at the hostel were giving free beers to all the guests, they cooked a wonderful meal, hot-pot style… I was so out of it, I Xanaxed my way to bed, still feverish. 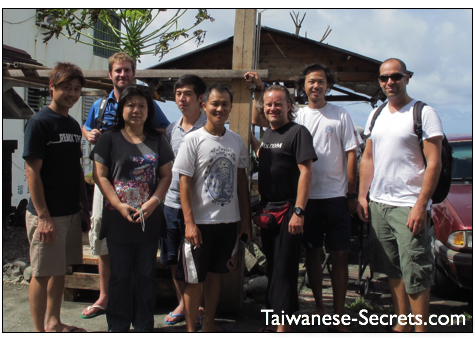 When we made it back to Taiwan, 2 days later, the sea was calm, my fever was gone, and Ben was ready to party. We took a train from Taitung, and believe it or not, the train hit a mudslide that was at the end of a tunnel. So we were IN the tunnel, worried about what had happened. We waited an eternity, the train made its way back to the nearest station, TV crews arrived, cameras everywhere, people were yelling, all of a sudden it was the government’s fault, buses arrived, more people yelling through loudspeakers, numbers were assigned… It was a real Chinese nightmare!

That’s the end of my crazy adventure on Lanyu in Taiwan.

Return from Adventure on Lanyu to Taiwanese Secrets Homepage