Jiufen is a really cool mountain town just a few kilometers away from Jinguashi, along the northeast coast of Taiwan. It’s the most popular tourist destination around Taipei City, and for that reason, it’s also one of the busiest spots on the island. But that shouldn’t stop you from visiting this beautiful old town – it has a lot to offer and I personally always keep coming back for more!

Jiufen, like Jinguashi, was once a mining town, but has been transformed into a mostly tourist economy. Its demeanor is probably one of the places in the world that truly feels like taking a step back in time to about early 19th century China or Taiwan. The winding mountain streets have a magical and whimsical feel.

Most Taiwanese tourists come to Jiufen for shopping and eating; lots of traditional wares that are hard to come by elsewhere are readily available here. Jiufen also has great views of mountains and the ocean meeting, as it is built into the hills.

Jiufen is also spelled “Jioufen” in many guidebooks.

Jiufen Old Street
This is almost definitely the most important and most popular of things to do in Jiufen. The old street is a time capsule of Chinese vending, with traditional foods, teas and sundries that have been forgotten about elsewhere. The winding, narrow streets bring with them local artists, boutique shops, calligraphers and more. It will be a hard place to miss – just follow the crowds. Be sure also to take note of the early 20th century architecture, one of the most distinctive qualities of the street.

Shengping Theater
Now closed down and taken over by flora, the Shengping Theater keeps with Jiufen’s cinema theme. It is said to be the first modern theater even built in Taiwan, constructed around 1914 by the Japanese. It’s a very photogenic location and is famous amongst the Taiwanese as the location of many famous scenes in Taiwan’s rich film history. It lies just down the hill from the main commercial street.

Taiyan Corporation Historic Office Buildings
If you’re interested in the period of Japanese occupation of Taiwan, you can check out the office buildings built and used by the mining corporation from 1937. Though gold mining has since stopped in Jiufen, the office buildings serve as a mini museum to the period, with some of the area’s various mineral specimens, the equipment used during the mining days and more. However, if mining is your thing, you might be better off heading to Jinguashi.

Jiufen is in the mountains, and walking up and down its streets will most likely already feel like a bit of a hike. If that’s not enough for you, though, you can venture up to the top of Keelung Mountain (588m high), which separates Jiufen and Jinguashan and has great views.

The mountain is steep and can be a challenge for the never-hiked-before-traveler, but it is worth it if you’re willing to put in the effort. The whole trail is man-made, like most hiking trails in this part of Taiwan. Allow about 2 hours for the round trip. 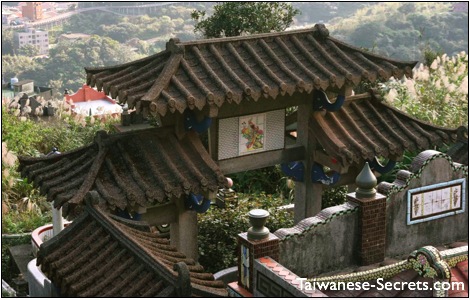 Walking is going to be your main mode of transportation. The narrow, hilly streets make anything else nearly impossible. The more adventurous might look for an exhilarating hike up to the top of Keelung Mountain.

Jiufen is chock-full of edibles (and drinkables, mostly tea), so make sure you go hungry and ready for a huge sampling of new tastes.

City of Sadness Restaurant
An uncreative (and rather depressing) name, this restaurant is nonetheless an institution in Jiufen. It is named after the famous film which featured it oh so many years ago. It’s right next to Shengping Theater.
No. 35 Shuchi Rd.

Ah Gan Yee Yuyuan
Jiufen is famous for its taro balls, and this is a great place to get them. If you are on the old street and walk up and up and up, eventually you’ll find this place, serving up taro with all kinds of beans. The elevation brings its rewards – Ah Gan Yee has huge windows with great views of the mountains and the ocean.

Street food
Your nose will compel you to indulge in some or all of the street food options regularly sold on Jiufen Old Street. Besides the taro balls mentioned above, you can sample beef noodles, wild boar sausage, dumplings, fishball soup, and more. Again, go hungry or regret it.

Spend a night at the best hotel in the area!

Like Jinguashi, most people don’t stay overnight in Jiufen, and prefer day trips from nearby cities like Keelung or Taipei. If you must, some bed and breakfasts or small guest houses are around for the weary to lay their heads. If possible, try to get a room which faces East, so you can enjoy the sunset in the morning.  The following box will help you find a room in the area, which is called Ruifang District.

There are many buses you can take to get to Jiufen from Taipei and other cities in Northern Taiwan. Here are some public transportation routes you can consider:

From Taipei, you can take bus 1062 from Zhongxiao Fuxing MRT Station. Along the way, the bus stops at Ruifang Train Station, Jinguashi, and it will drop you at Jiufen Old Street at the end of the route. Buses leave every 20 minutes or so from the MRT station in Taipei. 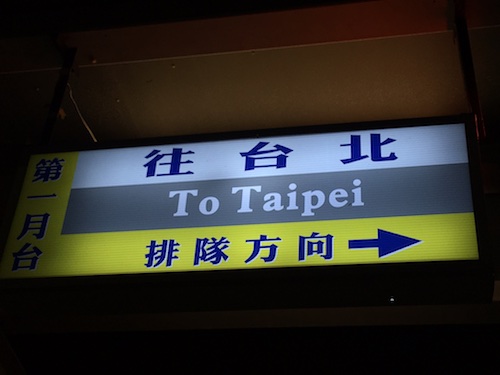 From Keelung Rail Station, bus 788 can take you to Jinguashi and Jiufen Old Street. Buses leave every 15 minutes.

This bus from the highly popular and convenient Taiwan Tourist Shuttle service does the following route: Ruifang Train Station – Jiufen – Golden Museum – Golden Waterfall – Shuinandong – Nanya – Bitou – Long Dong – Aodi – Fulong. The first bus is at 9am and the last bus leaves at 4pm from Ruifang. Buses leave every hour. Price: 15NT$ for the Ruifang to Jiufen section; 15 minutes, depending on traffic.

There is no train station in Jiufen, so you’ll have to take a bus from either Keelung or Ruifang Train Station.

The nearest High Speed Rail Station is in Taipei City, from where you can take a normal train (TRA) to Keelung or Ruifang train station.

Jiufen to Taipei by Taxi

If you miss the last bus, or you simply don’t want to take the bus back to Taipei from Jiufen because you’ve lost your patience on the old street, you can catch a cab all the way back to Taipei. it only takes about 30 to 40 minutes and it will cost you around 1200NT$ to get to Taipei Main Station, and approximately 1000 to Taipei 101.

Links about Transportation in Taiwan:

More pictures of my trips to Jiufen, Taiwan 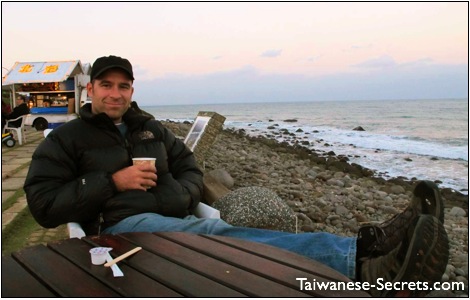 Other Destinations in North / East Taiwan