Before you read on, let me just tell you one thing: Hualien is an absolute must-visit destination in Taiwan, so make sure to bookmark this page, or highlight it in your guidebook. No visit to Formosa is complete without visiting this area.

Hualien is the main city on the East Coast of Taiwan. Most travelers who only have a day or two to visit this part of the island usually only spend a night here and arrange a day-trip to nearby Taroko Gorge, then head straight back to Taipei City.

If you have more than a day or two, you should definitely plan to spend more time around here. There are so many amazing things to see and do along the East Coast of Taiwan, and Hualien makes a perfect “basecamp” from where you can discover beaches, the East Rift Valley, hiking trails, harbors, hot-springs, waterfalls, and even do some river-tracing.

Hualien is also where people begin the famous and scenic Highway 11 road-trip all the way down to Taitung City.

Quick facts about Hualien and the east coast:

Attractions and Things to Do in Hualien City

As usual, my top advice for you is to simply walk around. The downtown core (around this Starbucks) is really enjoyable on foot, any time of the day. The main roads have wide sidewalks and so do the small alleys. The lanes between Dongdamen Night Market and Hualien Cultural and Creative Park (see picture below) are full of traditional stores, some beer houses, small shops, eateries, and Japanese style houses. Great area for street photography.

Hualien’s Martyr’s Shrine is located on the edge of Meilun Mountain, to the east of the city, at the end of Linsen Road. It’s a great spot for nice city views at any time of the day. The shrine honours Kuomingtang soldiers who died during the Chinese civil war. The buildings have been undergoing renovations for almost two decades, but it’s finally open to the public as of July 2021.

Most likely, your idea of Hualien is of ocean, mountains, nature, and not of visiting more temples! No doubt the buildings themselves are not unlike any classical Chinese ones you’ll find around Taiwan. However, what makes the Martyr’s Shrine an interesting stop is the vantage point it offers you. On a clear day, you can see the highest peaks of the Central Mountain Range towering above the city, and it’s an unbeatable sight you’re not about to forget.

Only a ten-minute ride outside the city, this long, quiet beach is a great place to enjoy expansive views of both the sea and the mountains. The beach is covered with black stones, not sand. It’s not a really swimmer-friendly place, but I’ve gone for dips there in the past with my friends. You can cycle all the way up here from Nanbin Park on the Coastal Bike Trail. There’s a dozen hotels and homestays at the southern end of the bay, behind the airforce base.

You’ll love this port! It has an energy that’s hard to find elsewhere in the city. Just walk around the docks and observe the harbor life unfold quietly between the colorful boats, fishing nets and the sound of the ocean. Fishermen from distant lands will give you curious looks while local folks will invite you to join them for a beetle nut, a smoke, and  Taiwan beer.

East coast’s residents take their religion very seriously. That’s why you’re guaranteed to see something interesting if you visit one of the many temples scattered around the city. Dongjingchan Temple is a particularly fascinating Buddhist shrine where you’ll find golden Buddha statues and tranquility that’s hard to find elsewhere in Hualien.

The main attraction here is the Still Thoughts Hall and it’s majestic roof. It’s got to be one of the most beautiful and photogenic structure on the island. The Tzu Chi Foundation is the world’s biggest charitable Buddhist society. Check out the exhibition halls and make sure you don’t miss the free vegetarian lunch, around noon, in the building behind the main hall.

From the winding, precarious road, you can see these steep rock faces plummet dramatically into the turquoise water of the Pacific Ocean. The sheer Qingshui Cliffs are along highway 9, about 25km north of Hualien City, between Chongde and Heren.

Beware if you ride your scooter or bicycle there – the traffic is heavy, the air filthy and the truck drivers wired on beetle nuts. It’s the only road on the island that can make me shiver.

Liyu Lake is in Shoufeng, just at the entrance of the East Rift Valley. Some people find it too touristy, but I personally think that it’s one of the best spots near Hualien to have coffee or have a quiet stroll in nature. There’s a campground, some restaurants, a visitor center, a bicycle path that circles the lake, and even paddle boats for rent. It’s best to visit on weekdays.

Jici’s black sand seashore envelops a crescent-shaped bay that’s surrounded by green, lofty mountains. It’s definitely one of the finest places to swim on the east coast and a cool spot to surf. Takes about 30 minutes to get here from Hualien. Bring food and drinks – you won’t find 7-11s in that area.

There are two viewpoints from where you can get stunning views of Jiqi. One is to the north of the bay, at Baqi 芭崎, a little rest area along Highway 11. The other is south of the beach, up the little hill, which is called Dashibi Mountain. The hike to the top is short and easy, although quite hot in summer. You can park your car at the harbor, by the gazebo if you plan to do the hike.

It’s possible to snorkel at the southern end of the bay, but don’t expect to see the kind of colorful sea life you’d find in Kenting.

Take a road trip down Highway 11

This is one of the most amazing road-trips you’ve ever taken – guaranteed!

This journey takes you south, all the way to Taitung (Taidong), along Taiwan’s magnificent coastline and through tranquil rice-paddied countryside. Don’t rush it! Take your time and stop at the humble fishing villages, aboriginal towns and viewing platforms along the way. Don’t bus it either. The experience will be so much better if you have your own wheels. There are some campsites along the way. Read about Highway 11 here.

There are many reasonably priced hotels and bed and breakfasts in Hualien that are of international standard. Cheaper accommodation like hostels and guesthouses can be found easily around the train station. If you want to be near the “action” at night, you should book a room near Zhongshan Rd. / Zhongzheng Rd. intersection.

The downtown area near the intersection of Zhongshan and Zhongzheng Road is packed with restaurants, food stalls, and teashops. At night, the area comes to life and it’s fun to just walk around and sample different stuff.

Salt Lick BBQ  at #147 Zhongshan Road, in downtown Hualien is my #1 Top Pick! Check it out, you cannot be disappointed, it’s the best American BBQ restaurant in Taiwan! Try their pulled pork burger or the ribs. The beef brisket is also lethal.

Bianshi and muaji are two names that come to mind when thinking about the area’s specialties. Bianshi 扁食 is a type of pork and shrimp dumplings in soup (wonton soup). There are many good restaurants in town that sell this tasty meal, but I always go back to Daiji Bianshi, at #120 Zhonghua Rd. This local canteen is right downtown and the soup they serve is huge. NT50/bowl.

Another great place to sample bianshi is at a restaurant called 花蓮香. You pay a little more (70NT$), but the bowl is HUGE! This restaurant has lots of seats and it’s always super busy. What I like about 花蓮香is that they offer lots of small, cold dishes, and they’re all delicious, and cheap (20NT$). Map

Muajis are sticky rice cakes filled with sweets. You’ll find them in the bright, yellow cakeshops on Zhongshan and Zhonghua Rd. Try the peanut and strawberry ones.

By Air: The city has daily air connection with Kaohsiung and Taipei. Hualien Airport is 6km north of the city. It has a rental car agency and a good information desk where Taiwanese people can help you in English.

By Train: Taking the train is the most convenient way to get here. One way from Taipei: fast/slow; NT455/345; 2hr/3.5hr. The fast train is called Taroko (Tailuge). An even faster train is called the Puyuma. Book ahead of time if you want to have a seat as this train is often crowded. The train station is in the northern part of the city (2km from downtown). 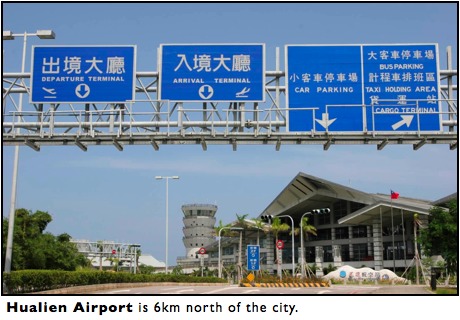 By Bus: Traveling in and around Hualien by bus is really confusing – lots of stations, tons of companies, changing schedules…. I recommend you take information from the people who work at the visitor center just outside the train station.

Anyway, I’ll still do my best to show you the lowdown. I hope it makes sense…

The Hualien Bus Company has buses to Taroko Gorge, Taitung, and Lishan. It has two stations: one is at the downtown terminal, the other is right in front of the train station.

You can rent a scooter by the train station. Expect to pay around NT350-450 per day. If you plan on taking trips down Highway 11 or up Taroko Gorge, get at least a 125cc. Make sure the back tire still has some thread. Bring your passport and international driver’s license. Pony Leasing and Rental Group, by Ching Yeh Hotel, is supposed to be the easiest place to get one.

To discover the downtown core, walking is still your best option. Moving around by foot in the small lanes off the main roads is a guaranteed way to find little traditional cafes / restaurants / stores that probably aren’t in guidebooks or blogs. The city is safe, the people are friendly, and walking around Hualien is in itself a “thing to do”!

Buses run between the airport and the station downtown every 20 minutes; NT25.

Hualien city is quite big and so you might be wondering where to stay. Good question. Since 2000, I’ve stayed here more than 50 times, in various neighborhoods, so I can surely guide you.

There are basically 3 main areas that you’ll want to consider:

Train station area: convenient if you have to catch an early bus or train, lots of cheap backpacker hostels, many scooter rental shops, not the prettiest part of town

Qixingtan Beach: If you want a room with seaview, this is the closest seaside area you’ll find in the city. The downside is that there’s not much around here in terms of dining, nightlife options. Also, there’s a military base just behind, so might be woken up by the sound of F-16 at 5am. That being said, I still stay there from time to time, as I love waking up in front of the ocean.

Taiwan isn’t just cities and factories. The island is home to Northeast Asia’s tallest summit and to more than 240 peaks over 3000m. If you like nature, mountains and outdoor activities, you should take a look at this page.