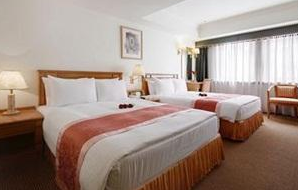 Info About the Hotel Cosmos in Taipei

More About the Hotel Cosmos in Taipei

Located just a couple minutes from the main transportation hub of Taipei – Taipei Main Station – the Cosmos Hotel is in one of the areas of the city perhaps most suited for those of the tourist variety. From Taipei Main Station, it’s really easy to get anywhere in the city (or the rest of the island, for that matter) efficiently. Perhaps more importantly, getting from Taoyuan International Airport to Taipei Main Station is a breeze.

Also, this is an area with some of the most historically interesting tourist spots, such as the 228 Peace Park and Chiang Kai-Shek Memorial Hall.

Taipei’s Cosmos Hotel also gives a few quirky services that you might not find elsewhere, such as a barbershop and a whopping 12 KTV (Asian-style karaoke) rooms. If you have a free hour or five, make sure to stop in to these KTV rooms on the 2nd and 3rd floors. There is also, surprisingly, an offering of Italian gelato (whose consistency is not altogether unlike the Taiwanese version of ice cream).

The Hotel Cosmos Taipei is on the less expensive end of mid-range, and gives you a more local version of things compared to the Western-style hotels that are a lot easier to find on the web or elsewhere.

Check room availability and make a reservation at the Taipei Cosmos Hotel.

Visit HotelsCombined.com now to check current room rates and book your stay at the Cosmos Hotel Taipei. Hotels Combined has a very reliable hotel booking system and I’ve used their website for years. From there, you’ll also be able to find tons of other quality hotels in Taipei and Taiwan.

Return From Hotel Cosmos Taipei, Taiwan to All Taipei Hotels