Guanziling (also spelled Kuanziling) is a small village located in the mountains of central Taiwan, between Chiayi and Yushan National Park in Tainan County.

What’s so special about those hot springs?

That’s exactly what I asked my girlfriend as we were driving in the mountains on the way to our resort. We had previously been to lots of other hot springs around the island, but this time I could tell she was excited about bathing in Guanziling.

She explained to me: “The springs are very different there. The town is built on a mineral-rich clay deposit and the water is like mud. It’s very good for the skin – like a natural cosmetic! There’s only two other places in the world that have that kind of springs – Sicily and Japan.”

So we were gonna have an actual mud bath…! Now I was the one who was getting excited. I couldn’t wait to get to that place. I had all these images of me swimming and diving in thick mud.

How disappointed I was when I saw that the only thing resembling mud was the color. It surely was grey, but the thickness aspect was not like what I had imagined. It was 100% liquid water! Not mud. 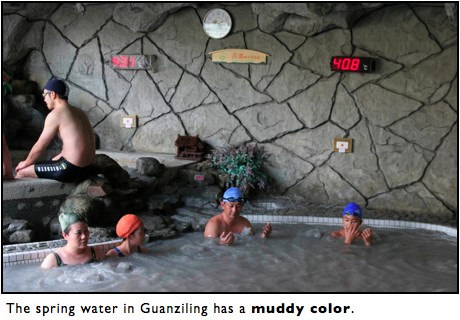 Some resorts in Guanziling do have big basins filled with mud mixed with apples, tea or plant extracts. You can cover your face or entire body with the mixture and then go in the pools after letting your skin absorb the magic stuff.

My favorite resort is King’s Garden Villa (Jingda Dujia Zhuangyuan). Their public pools (more than 15 of them) are the best in the area and they also have a huge swimming pool outside from where you can enjoy great views of the surrounding mountains. (adult/child NT$450/200)

Guanziling is renowned for its therapeutic water, but that’s not the only thing you’ll find here. The area is also home to some interesting monasteries, hiking trails and an unusual natural wonder called “Water Fire Cave”. What’s more? It’s in the mountains and the scenery is gorgeous.

I’ll begin with a warning: Don’t make it all the way up here to only see that “cave”. Taiwanese people will tell you it’s an absolutely incomprehensible and amazing sight! My second advice is: don’t get too enthusiastic.

First, it’s not even a cave – it’s more like a shallow cavity in a small rocky face. Second, the fire is just a little flame. Third, the entire place has the feel of a big tourist trap – especially on weekends.

So what is it exactly? The legend says that a long time ago, a fire dragon and a water tiger had a dispute, fought and then decided to coexist… I guess that, like me, you won’t buy into that and appreciate the real explanation: natural gas bubbles from a pond of water and ignites as it hits the air. 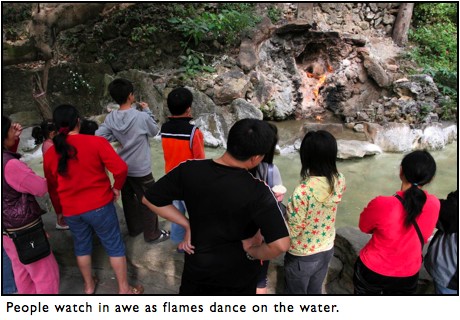 The real fun thing to do here, though, is watching the Taiwanese people – kids and grownups – freak right out as they see the flame on the water.

Guanziling’s Biyun temple is one of the best places on the island to see old Chinese rituals.

I’ve seen men hitting themselves on the head with axes, people doing strange dances while uttering incoherent sounds as well as a drunk fortune teller giving advice to a pregnant woman.

The most remarkable thing I’ve witnessed was a Chinese calligrapher writing characters on a kid’s face, head, arms and hands while his mother was holding him and other family members were watching.

I asked some people around what this was about and they said the kid was not getting good results at school and this ritual would fix all this.

The most intense part was the mother’s grave look on her face. I could tell this was an important moment and that she had high expectations. The boy was totally petrified. He didn’t even notice I was a foot away from him taking pictures and filming the big event.

There’s a couple of nice hiking trails around the village, but they’re usually packed with tourists on weekends and holidays.

To get away from the crowds, head south on road 175, or north on 172. Look for small paths and trails that cut into the bushes. Many of them will take you deep into bamboo forests, and I guarantee you won’t see any visitors there. 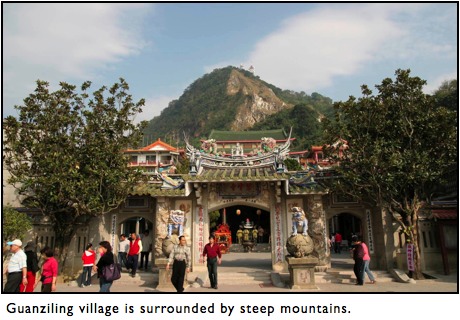 You’ll find tons of food stalls that serve Taiwanese snacks close to Water Fire Cave and the two main temples. The stinky tofu by the cave is one of the best I’ve ever had. The stand is easy to find – just follow the smell… and look for the longest lineup.

The main drag in the village is where you’ll find the big Chinese restaurants. If you decide to eat at one of the modern hot spring resorts, expect to pay at least 50% more. 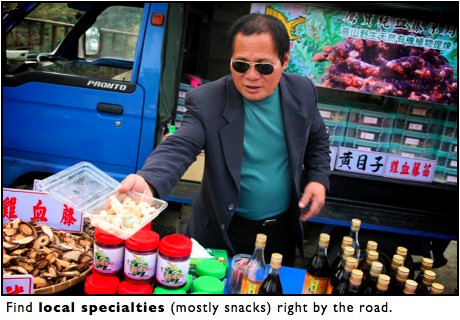 Most spas and hot spring resorts offer mid-range to top-end accommodation. The only hotel I stayed at was King’s Garden Villa and I was really satisfied with everything there. My room was very comfortable and had all the amenities you’d expect for NT$7000/night.

You could also spend a night in Beihe, which is not too far.

Or get a hotel room in Tainan, which is the nearest big city.

I highly recommend you rent a scooter in Chiayi and ride it all the way up here. If you have your own transportation, you’ll get to see more sights than if you have to walk everywhere.

If that option isn’t available to you, know that Chiayi Bus Companyhas regular buses to the village; NT$80, 1 hour.

Check out my GUANZILING MAP! A new window will open. You can locate the attractions, restaurants, and hotels in the left column.