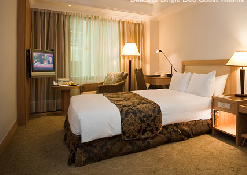 I’m hungry: The Golden China Hotel Taipei has a number of dining options: A cafe for kicking back, Les Champs Elysees Hall European-style buffet, and the Palace Hall which offers Taiwanese fare.

About the Golden China Hotel Taipei

Located on the newly built Luzhou MRT line, the Golden China Hotel in Taipei has seen a remodeling and is most likely getting a lot more foot traffic now that public transit has turned its way. This allows you to be close to some of Taipei’s lesser-known attractions, such as the Xingtian Temple, just across the street from the hotel.

It’s on the less expensive side, so you (for better or worse) won’t be getting the luxury of the top-name hotels that the city has to offer.
For business travelers, there is a business center with any of the gadgetry you might need to get work done or hold conferences. When your work is done (or avoided), Taipei’s Golden China Hotel can showcase its own wine gallery as well as a cafe and restaurants serving up both Western and Asian cuisine.

Arguably the most distinctive part of the Golden China Hotel is its placement in a more up-and-coming area of Taipei City. The Luzhou MRT line is by far the newest around, and development has yet to catch up with the new demand.

Make sure to check out the Les Champs Elysees Hall buffet, named after the famed avenue in Paris. It might not be the same as the Parisian version, but quality European food isn’t easy to come by in Taipei.

Return From Golden China Hotel Taipei to All Taipei Hotels