Understand what the Chinese Ghost Festival
(aka: Ghost Month) is all about! 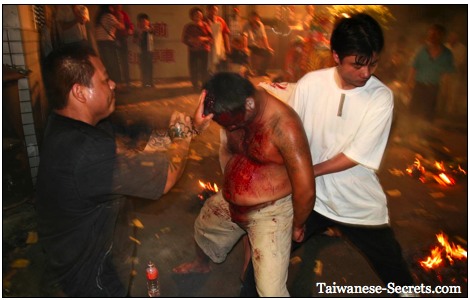 If you’ve ever been to China or Taiwan, have browsed through this website, or read about Chinese society, you’ve probably come to realize that Chinese culture abounds with the most unusual and disturbing customs and rituals. 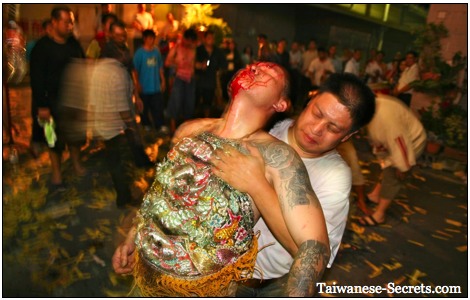 From men who hit themselves with axes on the skull for spiritual healing purposes, to shooting fireworks on people to scare away disease-spreading ghosts, traditional Chinese rites and ceremonies are always certain to surprise and shock. And the Ghost Festival in Taiwan is no exception.

When is the Ghost Festival?

The Chinese Ghost Festival is a month long event which takes place every year, during the seventh month of the Chinese calendar (lunar calendar) which is around August in the western calendar.

What happens during Ghost Month?

Religious events related to the Chinese Ghost Festival are held at various temples in Taipei, Taichung, Kaohsiung, and in other cities throughout Taiwan during the entire month. The most important celebrations are held in the following Taiwanese cities: Keelung in the north, Toucheng on the east coast, and Hengchun in the southern part of Taiwan.

The Gates of Hell are Unlatched!

The Ghost Festival begins on the first day of the seventh lunar month. On that day, the gates of hell are wide open and an army of hungry ghosts comes out to haunt the livings, eat Chinese food, drink rice wine, and collect ghost money.

If you want to appease the ghosts and protect yourself from the bad ones who might want to hurt you, you can do like most Taiwanese people. On the first day of the Ghost Month, you should:

At the end of the Ghost Month, it’s pretty much the same thing – people pray, burn some stuff, offer food and drinks on tables just before the gates of hell close, to make sure all the ghosts are happy, well-fed and prosperous… until next year.

13 things you don’t want to do during the Ghost Month:

Since I moved to Taiwan back in 2000, I’ve heard lots of funny, even questionable, recommendations from Taiwanese people. Many of those suggestions were related to bad or good luck, money, health, and of course, during the Chinese Ghost Festival, ghosts!

Here is a list of the 13 most interesting DON’Ts I’ve heard about what not to do during the Ghost Month in Taiwan:

Superstitions? Yes, but don’t tell them!

You shouldn’t tell Chinese or Taiwanese people that these Ghost Festival beliefs are superstitions even though we’re in 2010 and Taiwan is filled with bright, educated people who have definitely never seen a ghost.

I’ve swum in lakes, rivers and in the ocean multiple times during the Ghost Month and I was never caught by a ghost!

I’m one of those annoying people who whistle all the time, and as far as I know, I’ve never attracted hungry spirits.

I’ve even moved into a new apartment right in the middle of the Ghost Month, and doors were not shutting by themselves. I didn’t even have nightmares…

By the way, the first day of the Chinese Ghost Festival is also called “National Pollution Day” because of the massive amount of ghost money that’s burnt around Taiwan. It’s hard to understand why such a harmful custom persists in a highly educated society where most people are aware of environmental problems.

I wish you a happy Ghost Festival!

Return from Ghost Festival to Chinese Festivals in Taiwan