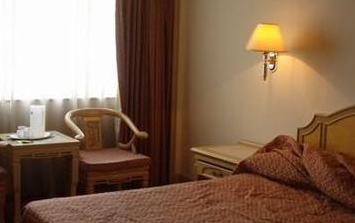 Info About the Taipei Flowers Hotel

I’m hungry: Coffee shop with breakfast and an in-house restaurant

More About the Hotel Flowers in Taipei

Taipei’s Flowers Hotel is a bit cryptic – there’s not a lot of information on it but it is a solid choice for a stay at a place on the budget end of the spectrum. In spite of its business center, it is definitely more suited to the tourist than the business traveler. It’s close to a lot of tourist destinations, to Taipei Main Station and to Ximen MRT station.
The rooms deliver the basics – A/C, satellite TV, room service and not much else.

However, the Flowers Hotel Taipei is right in the middle of the Ximen area, a great place for shopping and getting a taste of the Asian consumer experience. The Ximen Pedestrian area is blocked off to cars, leaving teenagers and stolen-watch salespeople to have a go. Also nearby are the 228 Peace Park, Presidential Office Building and Chiang Kai-Shek Memorial Hall.

Flowers has a cafe that serves up breakfast, but it’s probably not much different from whatever you might find just around the corner. Ximen is also famous for KTV, so you’ll more likely than not feel the strong pull of the outside world and leave your room.

Rooms at Taipei’s Flowers Hotel are pretty cheap, kept clean and the hot water flows. If you’re coming to Taipei to see the sights, that should be about all you require. Also, the name “Flowers Hotel” is just too pleasing to turn down.

Check room availability and make a reservation at the Flowers Hotel in Taipei, Taiwan.

Visit HotelsCombined.com now to check current room rates and book your stay at the Flowers Hotel. Hotels Combined has a very reliable hotel booking system and I’ve used their website for years. From there, you’ll also be able to find tons of other quality hotels in Taipei and Taiwan.

Flowers Hotel Taipei on a Map

Return From Flowers Hotel Taipei to All Taipei Hotels