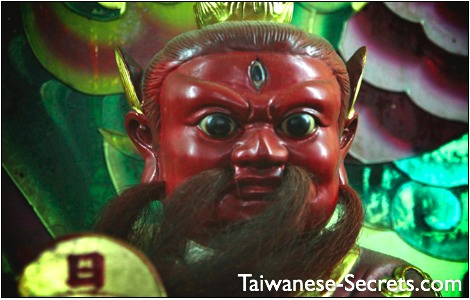 Guan Yu is sometimes referred to as the Chinese God of War, even though he technically wasn’t a god. He was a general who served under Liu Bei, an ancient Chinese warlord. He was alive during the Han Dynasty.

Guan Yu is one of the best-known characters in Chinese history. However, it’s thought that many of the stories about him are fictional. Guan is popular because he is seen as being loyal and righteous.

Many people still worship this Chinese god of war; it’s particularly common in the South of China and on Taiwan to worship him. He is a very important figure in Chinese religion.

There are many shrines to Guan Yu in restaurants and shops and these aren’t just confined to China and Taiwan, there are shrines for the man all over the world in Chinese communities.

Quite often Guan is called Emperor Guan, or Guan Gong. There are many temples which are dedicated to Guan the God of War throughout many Chinese territories, including oversees. Some of these temples were even built in the design of a palace which showed that he was an emperor.

40 years after his death he was awarded the title of Marquis Zhuangmou. This showed just how important he was to the Ancient Chinese and that’s why he is still worshiped today.  He was later awarded the titles of Duke and Prince.

He became an emperor during the Ming dynasty. And the title has been expanded and added many times since. Many people will shorten his name to Saint of War; this is the same rank Confucius had as he was Saint of Culture. These improved titles strengthened loyalty of the Mongol tribes as they also started to worship and highly regarded the Guan Yu, the Chinese God of War.

The Chinese God of War Today

Even though most people in China aren’t religious, many people still worship the God of War. Guan has many shrines located around the country; they are at homes and businesses. Hong Kong also has many shrines and actually has a shrine at every police station. Almost all Chinese policemen worship and respect Guan.

Guan is also worshiped by the triads. Both sides believe that there is a code of honor which must be followed.

Many of the temples which are dedicated to the Chinese God of War have an influence of Taoist design. There is also a street parade on Guan’s legendary birthday every year in many Chinese towns.

Return from Chinese God of War to Chinese Religions in Taiwan