Think twice! Maybe Mandarin is not for you.

Chinese language has become such a popular thing to study over the past few years, primarily because of China’s growing economic importance on the world scale. But the economy is not necessarily the best reason to learn a new language, nor is it the only one. There are a lot of motivating factors when it comes to learning a foreign language, and it is best to think twice before you enrol in any Chinese course.

I’m sure you can think of plenty of reasons that you should learn Chinese, so here are some reasons why you might not want to enrol in a Chinese course.

1. Chinese is incredibly difficult. As one of the world’s most difficult languages, a Chinese course might be a waste of time for you unless you are quite committed to sticking with it. 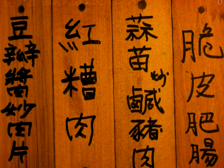 2. Many Chinese already speak English. It’s true that English is growing at a rapid rate all across the Chinese-speaking areas of the world, including Taiwan, Singapore, and Malaysia. This means that you might not need Chinese to get around if you are travelling or living there.

3. It takes years to master. The tonal quality of Chinese alone is so complicated for foreigners to learn that it takes years of study and devotion to really become fluent. Combine that with the complex writing system and you are looking at decades to being fully literate in Chinese.

4. It is useless elsewhere in the world. Aside from stumbling into a little Mandarin-speaking restaurant somewhere, there are very few places in the world where you’ll actually be able to use your Chinese outside of China, Taiwan, Singapore and Malaysia.

5. Tones. Chinese is a tonal language, meaning that the significance of a word is dependent on which tone it is spoken in. With four tones in the Mandarin language, there are four possible meanings for each word, giving an almost infinite number of words to be learned. Many people simply are not capable of hearing the difference between the tones, or are tone deaf and cannot use the tones properly. Note that learning Chinese is much easier for people who can already speak two languages.

6. The writing system is extremely complex. Chinese uses a very complex written system that utilizes iconographic characters, rather than an alphabet. The upshot is that every word is represented by its own little, complicated picture, rather than a series of phonetic sounds, as with English.

This complex writing system is made more difficult by the fact that characters used in Taiwan and Hong Kong are the older, more intricate ones, while in Mainland China, they use simplified forms. So, even if you enrol in a Chinese course, you must choose which written form to learn.

The complex nature of the Mandarin language makes taking a Chinese course a deep investment, and one that requires many years to see the fruits of. For many, this makes learning Chinese a waste of time, since they will never fully be able to use the language they’ve invested in. Unless you are truly committed to learning Chinese and are willing to spend the years studying the language and living in a Chinese-speaking city, a Chinese course might not be for you.

Facts About Mandarin Chinese
Mandarin Chinese language is spoken by more than one billion people around the world. Mandarin is written with symbols. There are over 100,000 Chinese characters… Read more here!

What’s Difficult About Learning Chinese Language?
Learning Mandarin Chinese can be challenging and frustrating. Read on to see what’s tough about learning this beautiful language.

Return from Don’t Enroll in a Chinese Course! to Study Mandarin Chinese in Taiwan