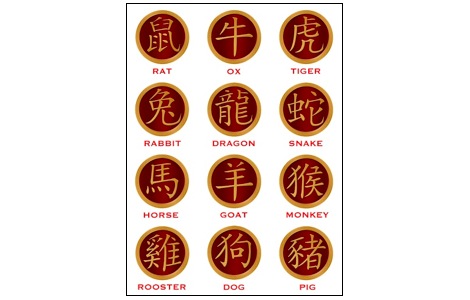 Facts About the 12 Chinese Zodiac Signs

Have you ever noticed those placemats with the Chinese birth signs, animals assigned to years? Most people in the West know, or think they know, the animal that is connected with their birth year. Of course these animals translate as the rat, the ox, the tiger, the rabbit, the dragon, the snake, the horse, the goat, the monkey, the rooster, the dog, and the pig.

Because the ancient Chinese followed their lunar calendar, rather than the western one you know, years go in cycles of twelve years, that is, not twelve months, as seen in the Western zodiac. Those Chinese place mats make the years and animals look very simple, but actually they aren’t.

For example, Chinese New Year shifts every year, and so if you were born in January or February, your Chinese birth sign may actually belong to the animal above or below what the simplistic paper placemat says.

If you really want to know which animal you are, you should consult a real zodiac calendar (you can easily find them on the web) and ignore what the placemat says. One friend of mine, born in February 1961, thought for years she was an ox! Imagine her surprise when her Taiwanese friends told her she is really a rat!

Don’t be surprised if, when in Taiwan or China or some other country populated heavily with Chinese people, someone asks you your Chinese birth sign. It can be a lively topic of conversation, and the person asking might be curious about your compatibility, in friendship or romance.

Also don’t be surprised if someone asks you your blood type. A whole system of personalities exists around this as well. If you want to have more fun chatting while in a Chinese country, make sure you know both before you go. Almost anyone will be pleased to tell you about your animal and your type.

Chinese people take the Lunar Calendar and the Chinese birth signs very seriously, and casting horoscopes is used from everything from choosing a good day to buy a stove, to marriage compatibility. Taiwanese newspapers, for example, have daily listings for what is auspicious to do or not to do on certain days, and many people really do observe the recommendations.

Chinese birth signs, including exact days and hours of birth, are cast by professionals who charge money. They are probably even more complex than the signs in the Western zodiac. In countries like Taiwan where people and thoughts are still steeped in ancient Chinese culture, compatibility between people who plan to get married is almost always assessed using a professionally done horoscope based on the couple’s Chinese birth signs before the engagement is set.

Since families are still involved in many couples ultimate choice of mate, sometimes people actually choose not to marry based on their horoscopes. In addition, scheduling wedding days, buying stoves, getting a haircul, moving into a new house depends on the Chinese birth signs and zodiac.

So before you visit Taiwan, have some fun by finding out your Chinese birth sign. You’ll have a great conversation piece.

Return from Chinese Birth Signs to Chinese Society and Culture