Welcome to one of Taipei’s most popular, and most photographed attraction!

The CKS Memorial Hall is also called National Chiang Kai-shek Memorial Hall. It is the iconic building that is at the Southeastern end of the vast Liberty Square.

Controversial figure as he was, after Chiang Kai-shek died in 1975 the government decided to construct a memorial to the creator of modern Taiwan, and to do it right in the middle of the city.

The Taipei CKS Memorial Hall is an awesome testament to the grandeur of dictators, and a vital part of the geography of Taipei.

Chiang Kai-shek Memorial Hall is made up of multiple parts, and is more like a super-ornate garden than anything else. The entrance area and majority of the park is the huge, wide-open plaza, where locals practice Tai-Chi at sunrise every day.

Flanking that are the Taipei National Theater and National Concert Hall, where some of the biggest-name arts events take place in Taipei.

Finally, the primary “memorial” itself is a massive white building, designed with traditional Chinese architecture in mind. The 89 steps that lead to the top are representative of Chiang’s age at his death – while panting at the top, you’ll wish he’d died sooner.

Below the massive statue of Chiang Kai-shek that sits atop the city is a museum dedicated to his life, complete with the sedans he rode to work in. It’s actually a fairly interesting look at a crucial time in Taiwan’s history, so check it out if you’ve got time to spare.

The ground around the memorial is called Chiang Kai-shek Memorial Park – 中正紀念公園. It covers an area of 240,000 square meter.

Bottom line: Wake up at sunrise to watch or take part in a gathering of Tai-Chi aficionados. Climb the 89 steps to the bronze statue of Mr. Chiang Kai-shek. Learn about Chiang’s life in the museum below. Stroll around the comfy gardens before catching a show at the Taiwan National Concert Hall.

CKS Memorial Hall is close enough to Taipei Main Station, so you can walk from there. On the way, you’ll pass a very lively neighborhood with tons of restaurants and small street stalls, as well as the vast 228 Peace Park.

How to say it: zhong zheng ji nian tang, 中正紀念堂

Facts about the CKS Memorial 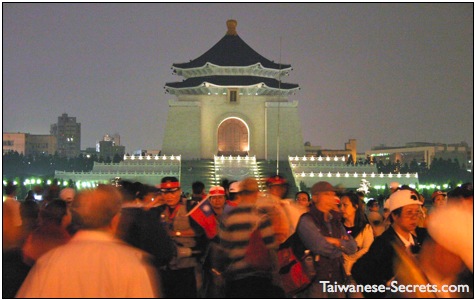