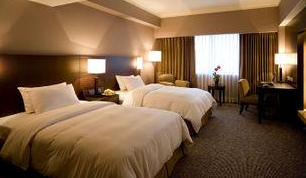 The Caesar Park Hotel Taipei is under a kilometer from the Cosmos Hotel, which means that it has all the conveniences of being right next to Taipei Main Station – ease of transportation to and from the airport, efficient travel to the rest of Taipei and/or Taiwan and a lot of interesting tourist attractions.

Unlike Cosmos, though, Caesar Park Hotel is decidedly more modern and luxurious. Its website claims (without proof) that it was the first 5-star international chain opened in Taipei. Well, regardless of whether that’s true or not, it definitely lives up to 5-star expectations. The 21st floor’s rooftop garden (open April 1 – October 31) serves you tea and delivers open-air, underwater massages.

Like most Taipei hotels, recognizing the city’s draw for business travelers, a business center with conference and meeting rooms, computer services and more is available.

The Taipei Caesar Park Hotel’s rooms are a bit on the pricey side but are slick and minimalist, decked out with complimentary internet in guest rooms, which is surprisingly rare even in high-tech Taipei.

If you’re aiming for the top of the top, the “Caesar Suite” is huge, and the complimentary pineapple cake they give your for staying there might just be worth the extra NT$35,000 per night (or not).

Check room availability and make a reservation at the Caesar Park Hotel in Taipei, Taiwan.

Visit HotelsCombined.com now to check current room rates and book your stay at the Caesar Park Hotel Taipei. Hotels Combined has a very reliable hotel booking system and I’ve used their website for years. From there, you’ll also be able to find tons of other quality hotels in Taipei and Taiwan.

Return From Hotel Caesar Park in Taipei, Taiwan to All Taipei Hotels

Back to Taiwanese Secret’s Homepage