Not many Taiwan guidebooks mention Caotun, an urban township located twenty minutes away from Taichung City. And I’m not gonna tell you that’s it’s a must-see destination either. Why not? What’s wrong with the place? There’s nothing wrong with it. But there’s also not much special either… Except for two very unusual temples.

Book your hotel in Taiwan today! 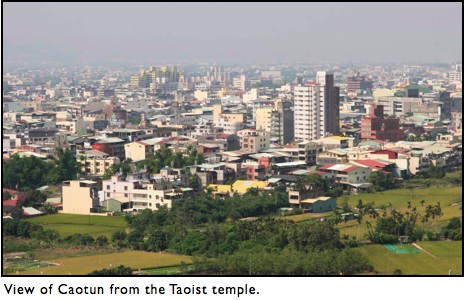 Perched on a quiet hillside, this massive Buddhist complexoverlooks the plain below with its green rice fields and endless sea of grey buildings.

In the central part of Taiwan, Lei Tsang Monastery is second only to Chung Tai Chan, in Puli. In term of what? Grandeur I’d say. Just the size of the gigantic sweeping roofs is enough to make you wonder… Who built that thing? Why up here? Who comes here anyway? The place seems deserted. And it’s so quiet. You can hear the sound of the city resonate against the walls. 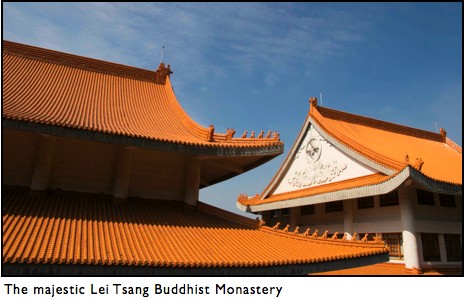 I once sat on the floor and a nun came to explain me some of the symbols and practices. One sentence struck me in particular. Looking at the huge towering figures she said: This is how most creatures on earth look at us. This is how powerful we look like. 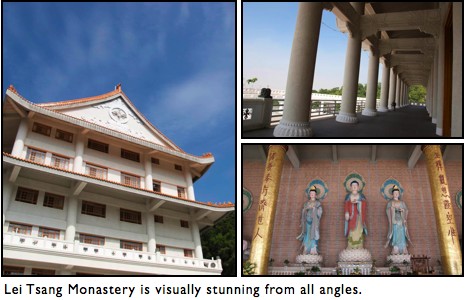 Apart from occupying the same hillside, this Taoist temple (sorry, I don’t even know its name) and Lei Tsang Monastery have nothing in common. I’ll say it again: nothing!

It’s actually the most bizarre thing I’ve ever seen in Taiwan. And that’s quite a statement, believe me – we don’t lack weird stuff on this island. The “temple” has the shape of a worm wearing a farmer’s hat. I’m sure there is deep significance to this design – probably based on ancient Chinese beliefs – but I simply couldn’t stop laughing while I was looking through the viewfinder of my camera. 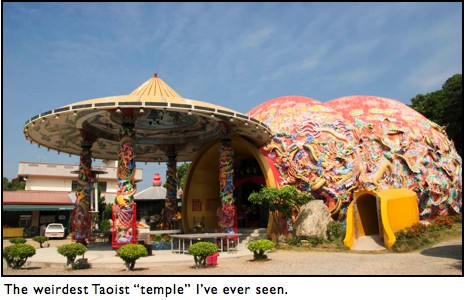 Don’t make too much noise when you walk in the “hall” (worm’s belly?!). You don’t want to scare the bats… There must have been a hundred of them flying around when I went there. Truly, it’s a fascinating place!

Downtown Caotun doesn’t lack restaurants and food stalls. I don’t have any recommendation for you (what kind of travel guide is this!?) but I’d say that your best bet for finding cheap Taiwanese snacks is in the small alleys of the traditional market south of Zhongzheng Rd.

Taichung is only minutes away… Better to head back there to spend the night. Accommodation is more plentiful and you’ll have better chances to find something fun to do at night. Nightlife is quite non-existent in Caotun.

If you drive, take Highway 63. If you ride, follow Highway 63 (under), but don’t get on it as scooters aren’t allowed. Careful if you ride at night – lots of dogs around. I have a broken kneecap to confirm this.

Buses leave from in front of Taichung train station every 20 minutes and take about half an hour to complete the journey.

Liked this page? Check out these links…

Lotus Pond in Kaohsiung City: More pagodas, temples, gods, incense and intriguing structures. Lotus Lake is not to be missed!

Old Lugang: Some Taiwanese say Lugang should be the place to visit if you only had to choose one for your travel around Taiwan.