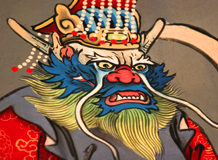 One of the most-overlooked and least-visited temples in Taipei, Baoan is a great stop for the temple enthusiast.

Baoan Temple has very large murals all around the complex that depict ancient Chinese scenes, dragons, and gods. Photographers will be delighted here!

Baoan Temple is situated in the Qing Dynasty-heavy Datong district, next to the more touristy Confucius temple. Baoan is Taoist in religion and is built to worship Baosheng Dadi, the divine physician who is most widespread in Taiwan.

This beautiful Chinese temple in Taipei was given a UNESCO Asia-Pacific Heritage Award, asserting the temple’s significance both as a modern place of worship and as a look back into Qing Dynasty architecture and Chinese folk religion. 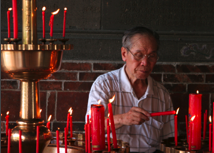 Because Baosheng Dadi is a divine doctor, Taiwanese women often visit the temple if they are having troubles with child birth, and he is consulted for medical problems generally.

If you’ve got any ailments, why not give Mr. Dadi a shot and visit him at Baoan Temple…

Baoan in Taipei also has a reputation for putting on a good festival. The focus on medicine offers lectures and sampling of traditional Chinese medicine, but operas, dances, ceremonies and parades also take place, especially during early March to early May, at which time the birthday of Baosheng Dadi is celebrated.

Bottom line: Snap some photos of Baosheng Dadi, the divine physician, ask him to heal you or your family’s medical troubles, sit in on a lecture of Chinese medicine, buy some helpful herbs to heal your stinky tofu-induced diarrhea and take in legit Qing Dynasty architecture.

Where it is: No.61, Hami St.
MRT Yuanshan Station

How to say it: bao an gong

After visiting Baoan Temple in Taipei, make sure to walk across the street to check out the Confucius Temple, if you haven’t already done so.

Another attraction near these two temples is the Taipei Fine Arts Museum.

Return from Baoan Temple in Taipei to Taipei Travel Information