“What do you think about ancient Chinese religion?“

That’s what a young Taiwanese lady asked me as I was trying to shoot a picture of an old man who was painting red Chinese characters on a living fish that was hanging (and wagging) from the lip of a huge, dead sacrificial pig. I turned to answer the girl, but the crowd had already swallowed her up! 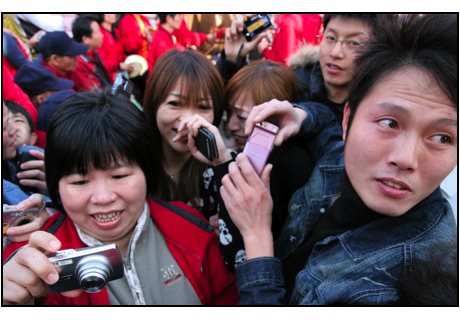 I first heard about Sanxia (also spelled Sansia) about 6 years ago, when one of my friends mentioned an unusual festival where families compete to grow the biggest sacrificial pig to celebrate Qingshui’s Birthday! Last Chinese New Year, after 6 years of curiosity, I decided to head up north, in the mountains of Taipei County, to check it out firsthand.

Note: Qingshui is a Chinese deity that originated in Fujian, China. He was an important figure in ancient Chinese religion.

“Hey Brian, wanna go to Sanxia next weekend to shoot some pictures of the pigs at that crazy festival? We could catch the latest train, hitchhike and get there early morning… What do you think?”

Brian is also into photography and he loved the idea from the start. “Sure man, I’ll go with you!” 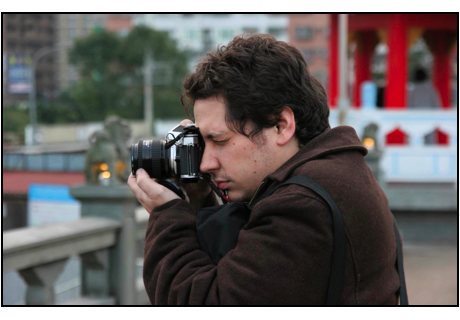 We took the train from Taichung around 11pm and got to Banqiao (just outside Taipei) 2 hours and 4 beers later. From there, we hitchhiked 20km south. The first car stopped as soon as I put my thumb up – classic. The second took a bit longer, maybe 3 minutes. Then things got a bit confused…

We ended up on a long, dark road by a train track, where the only cars passing us were cops and taxis. Not the ideal spot to catch a ride. But I didn’t care too much. The walking was good and Brian had good stories to tell. Plus, we had 2 full bags of beetle nuts to keep us awake.

Then, out of nowhere, we heard some music… 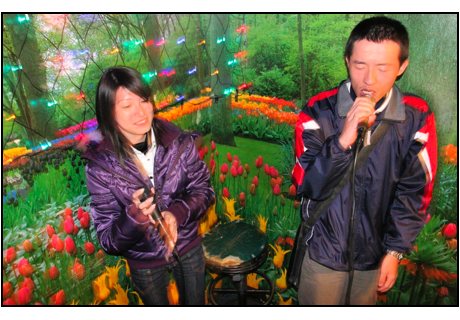 We couldn’t believe our ears! Out in the middle of nowhere (and I mean nowhere), around 4am, was a mom and pop KTV in a large container (as in transport container, yes). Did I mention that Brian and I enjoy having a drink? The Chinese god and the pigs were gonna have to wait a bit…

BTW: Did you really think this article was about ancient Chinese religion or Sanxia? Just kidding, we’re getting there… Stay with me! 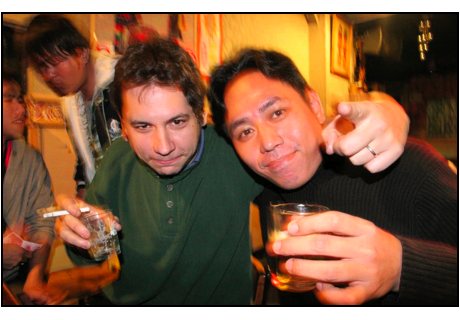 Don’t ask me how… but we finally got there!

We arrived in Sanxia, at Qingshui Zushi Temple, where the festivities were going to be held, around 8am. It’s the best time to visit the temple – you get the good morning light, the air is still crisp, and the colors are at their sharpest.

The shrine is said to be Taiwan’s most beautiful and ancient Chinese religion connoisseurs from all around the world come here every year to admire and study this piece of art. I have to admit that I was truly impressed by the intricate craftsmanship and the general decor of the main hall. 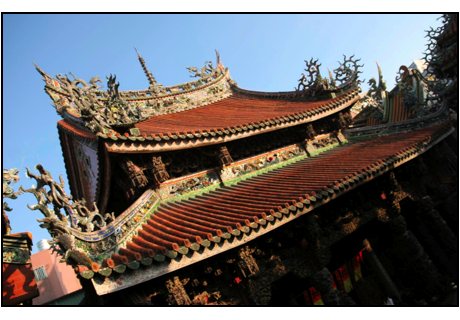 We were not the only photographers on the site, that’s for sure. The majority of the people who were walking around were equipped with the latest digital cameras, tripods, professional flashes and huge camera bags. It was a good sign – surely, some decent action was on its way. 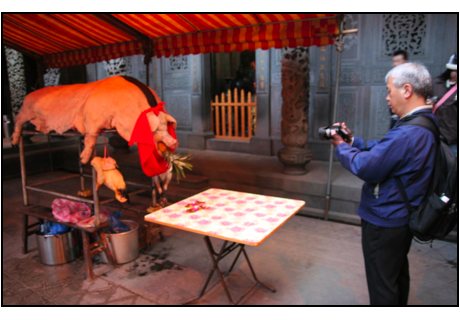 First, some priests appeared in the main hall, dressed in traditional attires. They read some ancient Chinese prayers, rang bells, burned paper and sticks of incense, then read some more… That part was a bit too serious for me – I was still in the KTV mood. 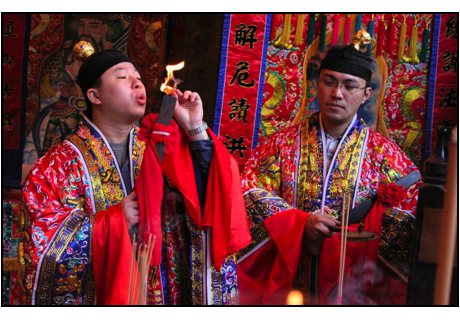 Then came the worshipers. I believe I saw the entire population of Taiwan pass through the temple’s main entrance to burn a stick. Ok, maybe not that many, but I mean… it was packed. The front courtyard was a sea of humans and still, more people were coming from all the surrounding alleys. This was no place for claustrophobics. 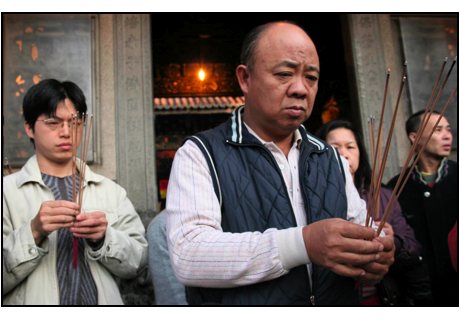 After burning tons of incense, the visitors gathered on the temple’s courtyard to watch supernatural beings (giant puppets) dance among a mad storm of firecrackers. Everyone in the crowd was climbing on top of each other to get better views, the music was deafening and I was having a real blast! 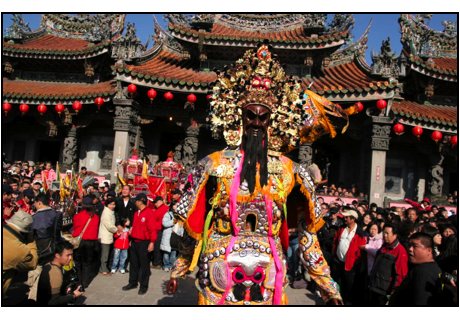 Then some pick-up trucks rolled in the mayhem to display giant sacrificial pigs. They were all showing impressive tattoos and calligraphy on their bodies. It was an arrestingly disturbing sight. 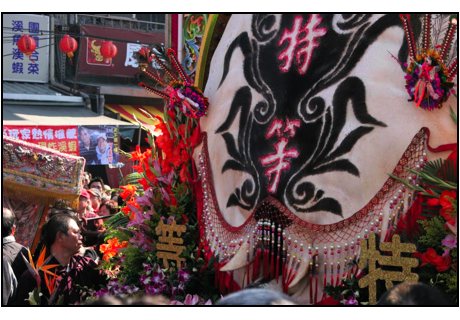 How weird is that?

I’ve seen crazy things in Taiwan, but that beat everything. Some of the pigs seemed to reach as high as 8 feet tall. I touched one of them and it felt like a balloon. Wait a minute… I had to see what this was all about. I made my way behind one of the hogs to find that the beast was being blown by an air compressor!

I remember thinking: that’s how you guys honor your gods?! 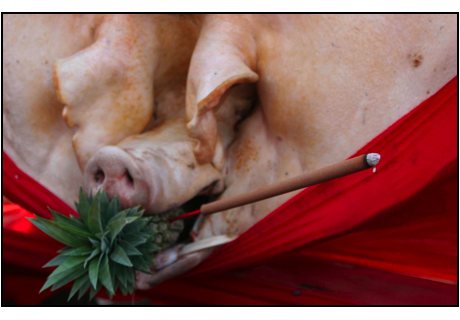 Then the madness went up one more notch. Elders started planting sticks of incense in pineapples that were in the pigs’ mouths. A man in trance was patting one of the beasts while looking at the sky, chanting and swaying, his eyes lost in a different world. And then came the fish that was going to be hooked to one of the hogs’ lip.

When the girl asked me “what do you think about ancient Chinese religion?” I was gonna reply: “It’s fascinating, but some parts just don’t make sense to me!” Maybe it’s just not something one should try to analyse to much. Still, I’m sure you’ll agree with me that’s it’s kind of odd?

In the end, the farmers who win the contest are supposed to have a prosperous year. I think that’s pretty much all there is to say about the Sanxia Festival. 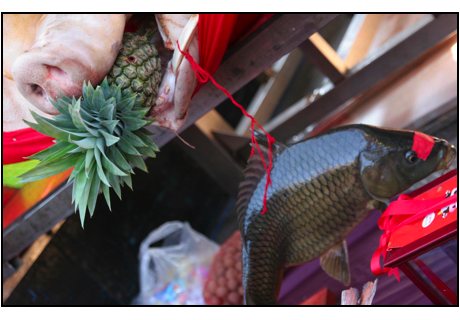 Another nice attraction is Sanxia’s old street with its double-story red-brick shops. Some of the buildings still use mortar made of glutinous rice and crushed seashells, a Dutch recipe. And talking about recipes, the old alley is also where you’ll find small eateries that sell Taiwanese snacks and drinks. 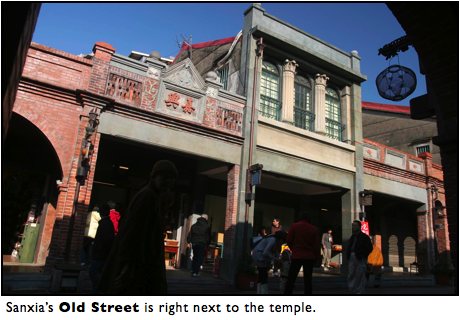 Getting There and Away – Getting Around

Hitchhiking is cool, but it’s not for everyone, I’m aware of that!

The fastest way to make it to Sanxia is to take the train to Yingge, a little town 3km away, across Highway 3. Walking between the station and Sanxia’s temple takes about an hour. A taxi won’t cost more than NT150 between these two points. Taipei-Yingge by train is about NT35; 30 minutes. Trains leave every 30 minutes. 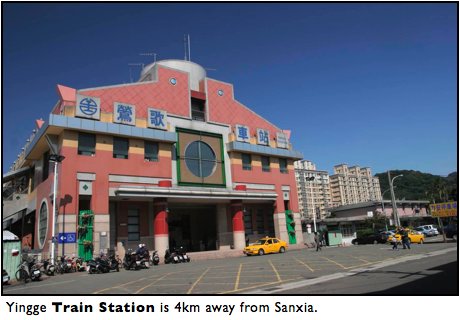 More Taiwan Travel Links for you…

And you might even want to see what Wikipedia has to say on ancient Chinese religions in this article.

Return from Ancient Chinese Religion in Sanxia to Taipei